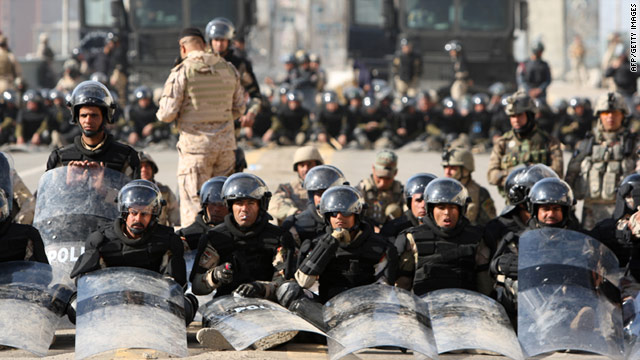 Iraqi riot police blocked the streets in the capital Baghdad on Friday as protesters headed on foot into the city center.
STORY HIGHLIGHTS

(CNN) -- Authorities imposed curfews and limited access to city centers across Iraq as thousands of protesters demanded economic progress and an end to corruption, police said.

Demonstrators were reported to be gathering in Baghdad, Basra, Nineveh, Anbar and Salaheddin.

The developments follow weeks of demonstrations across the country by protesters angry about unemployment, poor basic services, corruption and a lack of freedom. At least 13 people died in protests on February 25.

"We have elected you to protect us and not to kill us," one banner said.

"We live in a country rich with oil, yet we don't have jobs," demonstrators said. "The oil for the people and not for thieves."

In Baghdad, police imposed a ban on the movement of vehicles across the city, forcing protesters to walk several kilometers to Tahrir Square.