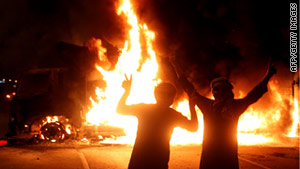 Oman's public prosecutors cited the setting of fires, damaging public and private property, blocking roads and impeding traffic flow in the city of Sohar and other locations. It said it will "initiate investigations against those who incited and carried out such acts.

"All these acts are against the laws, the tenets of the Islamic Sharia and the morals of the Omani society are known for," the prosecutors said in a statement reported by the Oman News Agency.

"While the freedom of opinion and expression is secured by the Basic Law of the State, the Basic Law also provides sanctuary to the public property. It also makes it obligatory for the citizens and residents as well to preserve them. It also provides for protection and prevention of assault on private property."

There have been protests recently in the key port city of Sohar and other places this week, and one person was killed on Monday. There have been reports of attacks on property and sources said demonstrators in Sohar have blocked routes to the port and the industrial zone, prompting port staff to leave work.

Protesters' demands include greater freedom of expression, higher salaries, a clampdown on government corruption, a new constitution, and the prosecution of security officials whose actions led to the death of demonstrators.

Oman is not a major oil producer, but a significant share of the world's oil shipping passes through the Strait of Hormuz, along the Omani coast.