Saudi security forces to crack down on any unlawful protesters 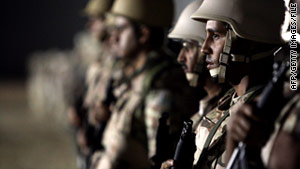 Saudi Arabia's Interior Ministry warns it will crack down on protesters who take their grievances to the streets.
STORY HIGHLIGHTS
RELATED TOPICS

(CNN) -- Coming off two days of demonstrations, Saudi Arabia's Interior Ministry warned Saturday that it would crack down on protesters who continue to take their grievances to the streets.

Saudi security forces will be "authorized to take all measures against anyone who tries to break the law and cause disorder," the ministry said, according to the country's state-run news agency.

The government cited how some were trying "to get around the systems" and "achieve illegitimate goals."

The Interior Ministry spokesman said that kingdom law prevents all kinds of demonstrations, protests, strikes and even a call for them because they're against Sharia law and Saudi values and traditions.

In response, Ibrahim al-Mugaiteeb, president of the Human Rights First Society, told CNN that the Interior Ministry is "not at all sensitive" to the massive unrest sweeping the Arab world.

"I'm hoping that the Ministry of the Interior and the government of Saudi Arabia will not choose to take the security solution road because that was already tested in other Arab countries and, by God, it did not work," said al-Mugaiteeb, who's in Saudi Arabia.

On Saturday, the Saudi government downplayed Friday's protests in the Eastern Province, saying the people weren't calling for a regime change.

"The protests that took place in the Eastern Province were small and were not political in nature," a Saudi government official told CNN. "The protesters weren't calling for regime change, they were asking for more jobs and calling for release of prisoners they feel were imprisoned unjustly."

The official, who asked not to be named because he was not authorized to speak to the media, said Friday's protest was not worrisome. "We don't feel they will spread throughout the kingdom or become bigger in nature," he said.

Demonstrators who protested in Eastern Province were demanding the release of Shiite prisoners they feel are being held without cause.

An outspoken Shiite prayer leader who demonstrators say was arrested more than a week ago was a focal point of the "day of rage" protest, said Ibrahim al-Mugaiteeb, president of the Human Rights First Society.

"We deplore this action by the Saudi security forces," he said.

Another protest took place in Riyadh after Friday prayer, according to two Saudi activists. The sources asked not to be identified because of concerns for their safety.

According to the activists, as many as 40 anti-government demonstrators gathered outside Al-Rajhi Mosque for a short protest. At least one man involved in organizing the protest was arrested by Saudi police, the activists said.

The government official told CNN that he was not aware of any protests or arrests in Riyadh.

When asked about the various rights groups in the kingdom who have been calling for the creation of a constitutional monarchy over the course of the past 2 weeks, the government official on Saturday stated, "Yes, there are groups here asking for more rights, calling for constitutional reforms, and that is their right to do so. King Abdullah has always encouraged a national dialogue and continues to do so."

The official insisted that the king "is doing all he can to improve things for Saudis."

"But in Saudi Arabia -- it's not like other countries -- we don't have or allow protests here. If people have a grievance, they can go and address it with the governors of their provinces or they can go to the Royal Court and address grievances directly there," the official said.

Saudi Arabia has cracked down on protests in the past.

Shiites are a minority in Saudi Arabia. They live primarily in the Eastern Province, where many major oil companies operate.

The protests come as sectarian violence between Shiites and Sunnis flares in neighboring Bahrain.

The Saudi government released three Shiite political prisoners ahead of the king's return.