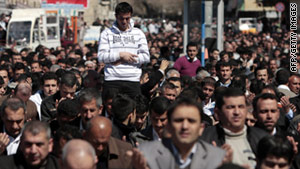 Hundreds of demonstrators gathered later in the day in Sulaimaniya for another protest against Massoud Barzani, president of the Kurdistan regional government, witnesses told CNN.

The unrest in northern Iraq that erupted three weeks ago has killed five people and injured 158 so far, the head of the emergency health department, Dr. Nozad Ahmed, said.

According to police officials, several empty tents erected by protesters at Bardagi-Sara central square of Sulaimaniya were set on fire before dawn. The attack was under investigation, the police officials said.

Some protesters blamed the attack on Kurdish security forces, who denied any involvement.

Separately, the head of an independent Kurdish radio station said Sunday that gunmen attacked the broadcast facility and destroyed or stole equipment overnight.

Azad Othman, the head of Dank Radio, told CNN that the attackers stormed the station in Kalar, a town 150 kilometers south of Sulaimaniya. Security officials in Sulaimaniya said they were investigating.

It was the second attack on an independent broadcaster in Kurdistan in the past two weeks. On February 20, masked gunmen attacked and burned NRT TV, wounding a guard, according to police officials and the broadcast company.

NRT, the first independent television station in northern Iraq, started broadcasting on February 17, and was the only station to air footage of shots fired at demonstrators on the first day of the protests, according to a company statement.

Protesters in the Kurdish region, mostly in Sulaimaniya, are demanding political reforms from Barzani's regional government and the ruling Kurdistan Democratic Party. Like protests in other areas of Iraq, the demonstrators also complain of corruption, unemployment and poor public services.

On Thursday, Barzani gave a televised address in which he called on the Iraqi Kurdistan Parliament to study the possibility of holding early general elections in the region. The previous regional election took place July 2009, with the next one currently scheduled for 2013.

Barzani expressed his admiration for the young people of Kurdistan for displaying political maturity in airing their demands through peaceful demonstrations. But he urged them to avoid resorting to violence, which he said would tarnish the image of the Kurdistan region.

Previously, he blamed the protests on a "very small group of people determined to undermine the stability of the region."