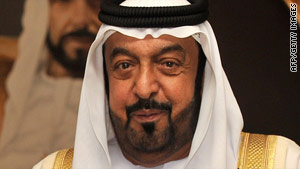 For a clickable map of the Middle East and Africa that shows the latest news and explains the roots of the unrest, go to www.cnn.com/interactive/2011/02/world
/map.unrest.fullpage/.

(CNN) -- A group of 133 United Arab Emirates nationals have petitioned the president of the country for direct elections.

It includes academics, former government officials, journalists and activists, said Ahmed Mansoor, one of the petitioners.

The petition comes in the midst of a wave of unrest and political change across the region that has brought new leadership to Egypt and Tunisia.

The petition is addressed to President Sheikh Khalifa bin Zayed Al Nahyan and the members of the Supreme Council of the seven Emirates that form the U.A.E.

In addition to elections, the group is also asking that the Federal National Council be granted legislative powers. The body only works in an advisory capacity and has no regulatory powers.

"The group called for a comprehensive reform of the parliamentary system of the Federal National Council (the Parliament), and included demands for free elections by all citizens," Mansoor said in an email. "It also demanded reform of legislation governing the work of the Parliament to include legislative and monitoring authorities and calling for necessary constitutional amendments to ensure that."

Despite widespread political unrest across the Middle East and North Africa, there have been no protests in the U.A.E. Demonstrations aren't technically illegal, but police never grant permits for them.