Hundreds injured during clashes between rival groups in Bahrain 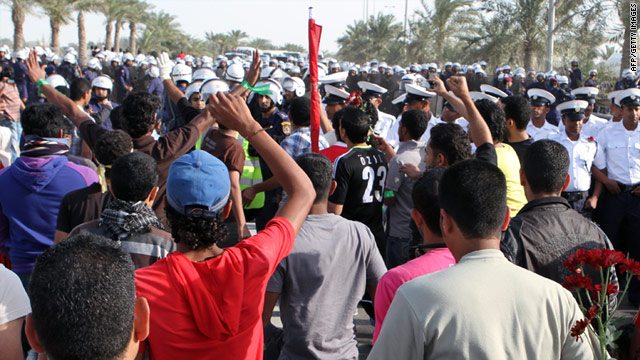 (CNN) -- Hundreds of people were injured in Bahrain Friday, when rival groups clashed over an attempted march in the town of Riffa, a residential area where the ruling Al-Khalifa family lives.

The national health ministry said 774 people were injured and 107 were hospitalized in the wake of the fighting.

Anti-government demonstrators in Riffa had planned a march. A crowd numbering roughly 8,000 set off on the march, according to Bahrain's ambassador to the United States.

But they were met by hundreds of people carrying swords, hatchets, metal pieces, cricket instruments and pieces of wood with nails hammered into them. The opposing group had already taken up positions in an effort to stop the planned march.

Bahrain's ambassador to the United States took the unusual step of commenting on the clashes in Riffa, which he called a "sectarian conflict" between Shia and Sunni Muslim factions. Law enforcement officers had erected barbed wire fences in an attempt to ward off any fighting, Houda Ezra Nonoo said in a statement.

The conflict began when small groups from opposing sides met at the security fence, she said.

Accounts that claimed live ammunition was used by government forces were "rumors," Nonoo added. She also denied allegations that people inhaled tear gas to the point of suffocation.

Only eight tear gas canisters were used to disperse the crowd, according to Nonoo's statement. Video footage would support his version of the operation, she said.

The attempted march in Riffa was organized by some of the more hard-line Shia groups among the government opposition. However, there are also moderate Shia groups and Sunni groups in the anti-government coalition.

The Shiite Muslim majority has staged protests in recent years to complain about discrimination, unemployment and corruption.

Riffa is just over 12 miles (20 kilometers) southwest of the capital, Manama, where demonstrators have been protesting in Pearl Roundabout for a month. Seven people died there when security personnel tried to clear the area in mid-February.

Protesters initially took to the streets of Manama to demand reform and the introduction of a constitutional monarchy. More than 500 people have been injured in Bahrain since the protest began, which human rights activists say is part of a wave of popular unrest crashing through the Arab world

The Bahrain Center for Human Rights said authorities launched a clampdown on dissent in 2010. It accused the government of torturing some human rights activists.