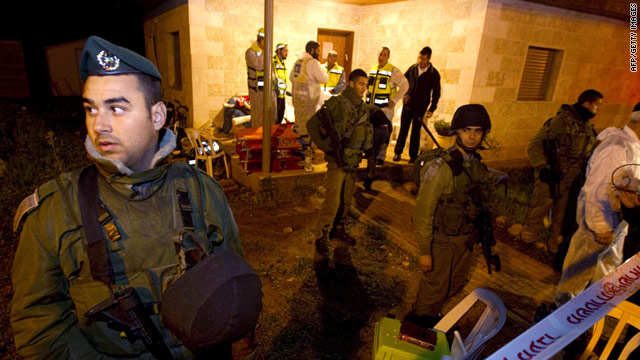 Israeli soldiers block access to a house where five Israelis were murdered in the Jewish settlement of Itamar on Saturday.
STORY HIGHLIGHTS
RELATED TOPICS

Jerusalem (CNN) -- Israel approved the construction of several hundred housing units in the West Bank, the prime minister's office said early Sunday, a day after five Israelis were killed in their home in the disputed territory.

The development came shortly after five members of an Israeli family were killed in the West Bank, in what Israel is calling a terror attack.

"The terrorists murdered a young family, a mother, a father, a boy of 11, a boy of 4, a baby girl of four months. They all had their throats slit," Prime Minister Benjamin Netanyahu said Saturday.

Throngs of mourners gathered in Jerusalem Sunday for the funeral of Ehud Fogel 36, his wife Ruth, 35, and their children Yoav, Elad and Hadas. The event was broadcast on Israeli television.

Their bodies were discovered by the Fogels' 12-year-old daughter when she came home Friday night, a family neighbor told Israeli media. Two other children were left alive when the killers apparently did not notice the door to the room they were sleeping in.

"In a moment they were torn away from us by the force of monsters, vicious animals that were capable of slashing the throats of a boy or a baby a few months old," said Rabbi Meir Lau, former chief rabbi of Israel, at the burial service for the slain family members.

Mourners encircling the shrouded bodies of the victims wept and prayed.

Ruth Fogel's father, Rabbi Yehuda Ben Yishai said "our children are prepared to be sacrificed as an offering at the altar we have to continue to build to bring redemption. Hudi and Ruthie wanted this redemption."

Israeli government spokesman Mark Regev said that "all objective data based on the investigation" led the government to believe "the only possible conclusion" was that the settlement murders were a terror attack. He would not elaborate on what evidence was leading investigators to that conclusion.

Netanyahu convened a special meeting of the ministerial committee for settlements Saturday night after the killings.

Interior Minister Eli Yishai argued that not enough new housing had been approved, saying the number should have been 5,000 units -- 1,000 for each person murdered.

He warned that it could lead to a further escalation of conflict between Palestinians and Israelis.

The Palestinian Authority and many international observers object to the expansion of Israeli settlements in the West Bank, which the Palestinians want to be the basis of a future state. Israel has temporarily halted settlement expansion in the past, but says a permanent freeze is a matter for negotiations with the Palestinians.

According to a military spokeswoman, an intruder entered the Israeli settlement of Itamar near the northern West Bank city of Nablus around 1 a.m., made his way into the family home and killed the two parents and their three children.

Abbas spoke to Netanyahu to express his sorrow over the event, the Israeli prime minister said Sunday -- adding it did not go far enough.

On Sunday, military units continued their search of the surrounding area for the assailant.

The White House condemned the slayings "in the strongest possible terms" and said the killers of the "heinous" act must be held accountable.

The United Nations, the European Union, the Russian Federation and United States also issued a joint statement condemning the murders. The four entities are members of the Quartet on the Middle East, an association involved in mediating the peace process between Israel and the Palestinians.

CNN's Shira Medding and Kevin Flower contributed to this report.