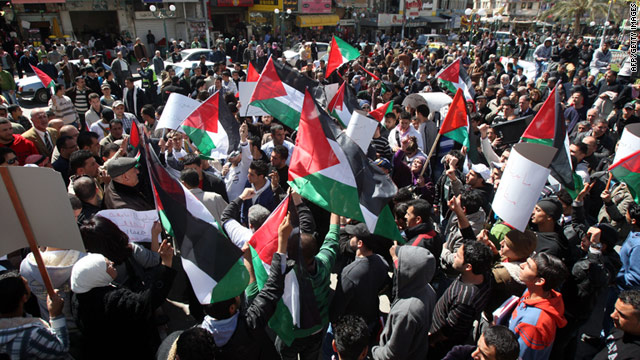 Palestinians demonstrate for unity between Fatah and Hamas in Nablus in the northern West Bank on Tuesday.
STORY HIGHLIGHTS
RELATED TOPICS

Jerusalem (CNN) -- Tens of thousands of Palestinians in Gaza and the West Bank took to the streets in mass demonstrations Tuesday demanding an end to the inter-Palestinian political division and an end to Israel's occupation of the Palestinian territories.

The largest protest took place in the coastal enclave of Gaza, where tens of thousands waved Palestinian flags and chanted, "The people want to end the political division" in imitation of the chants made by Tunisian and Egyptian protesters earlier this year.

During the course of the rally, a group of Hamas supporters in Gaza tried to disrupt the demonstration by waving their own flags and chanting pro-Hamas slogans.

The two sides briefly clashed with stone-throwing and fistfights.

The Ministry of Interior in Gaza ordered protesters to leave the streets by nightfall, and security personnel were dispatched to confront those who refused to leave, according to witnesses.

Witnesses reported several protesters were injured when Hamas dispersed the demonstrators in Gaza, with broken bones among the injuries. Medical sources in Gaza refused comment.

Hamas and the Fatah-dominated Palestinian Authority have been bitterly divided since 2007, when Hamas took over the Gaza Strip in a violent coup.

In the West Bank city of Ramallah, thousands of demonstrators representing a varied cross-section of Palestinian society called on the government to do more to bridge the political divide.

Najwan Baricdar, a youth activist and event organizer, told CNN the rally was inspired by the recent revolutions in Tunisia and Egypt and that many of the youth participants in the rally are fed up with the state of Palestinian politics.

"Our main demand is freedom, justice and right of return, which is the main Palestinian principle," she said. "In order to achieve that, we ask for holding PNC elections." PNC is the Palestinian National Council.

She criticized the involvement of various political factions, which she accused of attempting to hijack the event by ripping down event banners and disrupting the peaceful march.

On hand at the site of the rally were a dozen Palestinian hunger-strikers, who pledged not to eat until the political parties reconcile.

Mo'az Muslehone, of the strikers, said politicians ignore the people's message at their own peril.

"People will not stop until ending the division, and if you don't end it ... they will end it in a different way."

He said Palestinian police attempted to prevent them from sleeping in the square Monday night.

Independent lawmaker Mustafa Barghouti told CNN that the demonstration represents a new voice of the youth calling for democracy.

"What you see is the beginning of change, what you see is the voice of the young people and the silent majority among the Palestinians which are pressuring both Fatah and Hamas to end this terrible division, to end this internal competition about an authority which does not exist because it is all under occupation," Barghouti said. "You see the voice of the Palestinian majority asking for democracy back and asking for unity, which is the only way to end occupation and the suffering of the people."

In a statement released after his weekly Cabinet meeting, Palestinian Authority Prime Minister Salam Fayyad welcomed the youth movement, calling it a "means of ending the occupation and achieving national readiness for statehood."