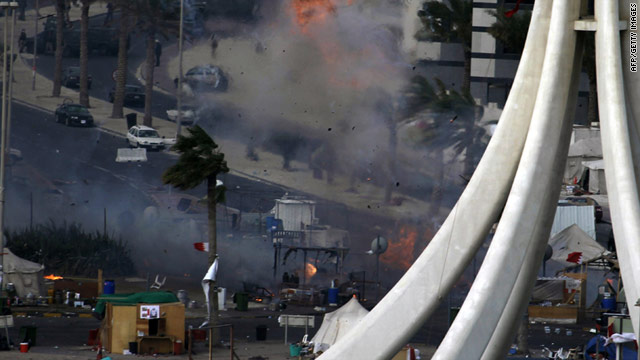 U.S. President Barack Obama has spoken to the Bahraini king to express his 'deep concern' at the violence.
STORY HIGHLIGHTS

Manama, Bahrain (CNN) -- A leading opposition figure in Bahrain said Thursday that government security forces were attacking villages and towns in their effort to subdue an uprising -- and accused them of committing a crime against humanity.

The U.N. human rights chief and Amnesty International both issued statements calling on the Bahraini government to halt the violence against its people.

"The current situation is devastating," said Khalil Almarzooq, who resigned as the country's first deputy speaker and joined protests against the government.

He described government forces taking action against some doctors at Salmaniya hospital, including one doctor allegedly being pulled out of surgery. The situation at the hospital is "a crime against humanity," he said.

Witnesses in the capital, Manama, said security forces in Bahrain stormed the main hospital, beating doctors, and attacked demonstrators in the city's Pearl Roundabout on Wednesday.

Tanks and troops remained at the hospital Thursday, CNN observed.

Amnesty International on Thursday accused Bahrain of using shotguns, tear gas and rubber bullets to subdue protesters, joining a growing chorus of concerns over the crackdown.

Security forces have used "excessive force," leading to the killing of eight people in recent violence, Amnesty said in a report.

"It is alarming to see the Bahraini authorities now again resorting to the same tactics that they used against protesters in February, but on an even more intensive scale," said Malcolm Smart, Amnesty International's director for the Middle East and North Africa.

U.N. High Commissioner for Human Rights Navi Pillay "is deeply alarmed by the escalation of violence by security forces in Bahrain," a statement from her office said Thursday.

"My office has been receiving desperate calls and emails from numerous individuals in Bahrain, terrified about the armed forces' intentions," she said in the statement. "There are reports of arbitrary arrests, killings, beatings of protesters and of medical personnel, and of the takeover of hospitals and medical centers by various security forces. These reportedly include Bahraini police, defense forces and troops from the Gulf Cooperation Council's Peninsula Shield Force. This is shocking and illegal conduct. Police and armed forces must immediately leave health-care facilities and cease their harassment and intimidation of health professionals."

Pillay's office cited "worrisome reports that electricity at the main hospital in Manama was cut on Wednesday and that security personnel were physically attacking medical workers, and preventing staff and patients from entering or leaving. Medical workers in Bahrain told Pillay's staff on Wednesday afternoon that critically injured patients dependent on ventilators might die unless power was quickly restored."

There were also reports that government forces blocked ambulances from transporting injured civilians to medical facilities, the statement said. "Governments are obliged to protect the rights to life and health of the people, but we are hearing very credible reports indicating that they are in fact obstructing access to such rights," Pillay said.

The statement from her office added that Pillay is concerned "that the King of Bahrain on Tuesday introduced a three-month state of emergency. She reminded the authorities that fundamental rights, such as the rights to life, and to be secure from torture and other cruel, inhuman or degrading treatment, cannot be derogated, even in a public emergency."

The U.K. Foreign Office on Thursday recommended that British nationals "who do not have a pressing reason to remain should leave" the country. It advised against all travel to Bahrain until further notice.

The protests started February 14 and are part of a series of demonstrations that have swept across the Arab world this year, toppling the leaders of Tunisia and Egypt.

In Bahrain, moderates have demanded a constitutional monarchy, and hard-liners have called for the abolition of the country's royal family altogether.

U.S. Secretary of State Hillary Clinton called the intervention by Bahrain's neighbors "alarming" and urged all players in the region to keep "their own agenda" out of the struggle.

President Barack Obama called both the Saudi and Bahraini kings to express his "deep concern over violence" and the need for "maximum restraint," according to White House spokesman Jay Carney.

Bahrain is home to the headquarters of the U.S. Navy's Fifth Fleet, the naval arm of American power in the region.

Authorities in Iran also weighed in on the issue.

Iran recalled its ambassador to Bahrain and accused the government of "killing of people of Bahrain," according to a statement.

Bahrain's Sunni Muslim monarchy has long suspected Iran of attempting to foment unrest among the island's majority-Shiite population, leaked U.S. diplomatic documents show, and Iran has asserted territorial claims over the onetime Persian province both before and after the 1979 revolution brought the current Islamic republic to power.

CNN's Mohammed Jamjoom and Leone Lakhani contributed to this report.