Iraqis protest against crackdown on Shiites in Bahrain 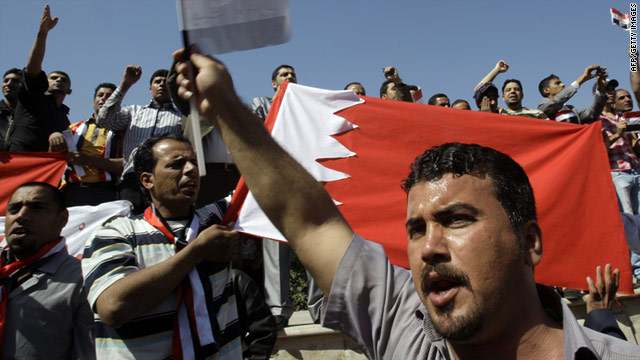 (CNN) -- Hundreds of angry Iraqis demonstrated in the holy Shiite city of Karbala on Thursday, protesting the use of foreign troops in the crackdown against anti-government protests in Bahrain.

This week, military forces from the Gulf Cooperation Council -- including Saudi Arabia -- arrived in Bahrain to help the kingdom control a wave of anti-government protests, prompting the Obama administration and U.N. Secretary-General Ban Ki-moon to urge council members to act with restraint and to allow the citizens of Bahrain to demonstrate peacefully.

In Karbala, some protesters carried Shiite flags as they condemned the brutal force wielded against Bahrain's predominantly Shiite demonstrators. The U.N. human rights chief and Amnesty International issued statements Thursday calling on the Bahraini government to halt the violence against its people.

Some of the Iraqi demonstrators held up banners reading, "No foreign troops in Bahrain." Others shouted, "Wahhabis! Leave Bahrain immediately," referring to Saudi Arabian troops.

A similar protest was held in Baghdad Thursday, and, during the parliamentary session, Sunni and Shiite lawmakers also condemned the foreign troops being employed in the crackdown.

Sunni Parliamentary Speaker Osama al-Nujaifisaid the violence against protesters could "potentially tear apart the social fabric of the country and in the region."

Former Prime Minister Ibrahim al-Jaafari, a Shiite, used stronger language during a speech to lawmakers, calling the use of foreign troops in Bahrain a "flagrant violation."

Sunnis make up the majority in the Arab world.

The protests in Iraq demanded economic progress, an end to corruption and basic services and freedoms.

"Many Iraqi protesters were killed and wounded when they only demanded some political reforms," Ali Raheem, an Iraqi activist, told CNN. "God knows what will happen to them if they demonstrate to topple this sectarian government."

The United Nations expressed its concerns about violence used against protesters across the country. "While acknowledging the duty incumbent on the Iraqi authorities to ensure law and order in the country, the U.N. in Iraq notes with concern that several instances of human rights violations in relation to the demonstrations have been reported," it said in a statement.

"The reported violations include disproportionate use of force by Iraqi security forces that resulted in the death and injury of a number of citizens; restrictions on the media and attacks on media organizations; and arrests and detention of, in particular, journalists."

The Iraqi government was formed in December, nine months after an inconclusive national election. This is the second elected government in the nearly eight years after a U.S.-led invasion toppled Saddam Hussein.