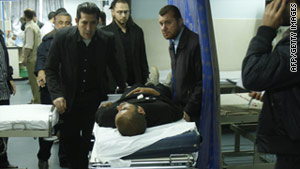 A man is wheeled into a hospital after being wounded following an Israeli strike in Gaza City on March 19.
STORY HIGHLIGHTS
RELATED TOPICS

Gaza City (CNN) -- Violence erupted in and around Gaza on Saturday, as Hamas security forces roughed up demonstrators and journalists, and five people were wounded in cross-border fighting.

Security forces stormed the offices of international news organizations after the violent break-up of a small demonstration in Gaza City on Saturday, witnesses said. Journalists covering that event were roughed up, they said.

They raided the offices of CNN, Reuters and Japanese broadcaster NHK, all in the same building where international news operations are located.

Reuters bureau chief for Israel and the Palestinian territories, Crispian Balmer, said one employee was beaten with an iron rod and another was threatened with being thrown out the window. He said a camera was confiscated but was later returned. A TV and a computer keyboard were destroyed by the security forces.

The forces forcibly entered the CNN office, demanding to see whether there was any television equipment and asking if anyone had been shooting video footage from the office.

No one was hurt at CNN and NHK.

After the incidents, Gaza-based journalists, many of whom work for international news organizations, staged a sit-in in Gaza City to protest the government's tactics and promised a boycott of Hamas press events.

The split developed after clashes between Hamas and Fatah in 2007 that led to Hamas seizing control in Gaza, and Fatah maintaining control of the West Bank.

It was the second time in a week that Hamas has cracked down on media covering street demonstrations inside the coastal enclave.

On Tuesday, thousands of demonstrators took to the streets calling for political reconciliation.

According to witnesses, security forces beat up and detained several protesters and journalists covering the rally.

The organization called the developments the latest in "string of of chilling attacks on reporters in Gaza."

Meanwhile, the cross-border violence between Israel and Gaza led to five injuries.

But the Israel Defense Forces said it launched strikes after dozens of mortar shells were fired from Gaza into southern Israel. The IDF said troops fired tank shells and helicopters backed forces on the ground.

It had no comment on the three injured people, one of whom is in critical condition. But the IDF said two Israeli civilians received minor injuries.

Israel said it won't allow Israel's southern communities to "continue living under constant threat" and it holds Hamas, the Palestinian movement that governs Gaza, "responsible for any terrorist activity emanating from the Gaza Strip."

Constant rocket fire into southern Israel by Palestinian militants prompted Israel to launch its three-week offensive against in Gaza from late 2008 into January 2009.