Bahrain rights advocate says he was beaten, blindfolded and detained 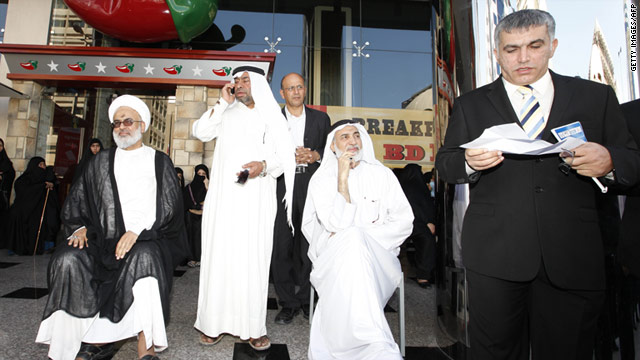 Manama, Bahrain (CNN) -- The outspoken head of a Bahrain human rights group said Sunday that he was handcuffed, blindfolded and beaten when authorities detained him for about two hours.

Nabeel Rajab of the Bahrain Center for Human Rights said about 25 people in about a dozen cars pulled up to his house early Sunday morning and took him to the offices of the interior ministry's investigative department.

"They said that they were looking for a suspect who was armed and thought I might know him," Rajab said. "They beat me, punched me, kicked me, handcuffed me. Blindfolded me."

The government confirmed Rajab was arrested but did not provide additional details.

Rajab and his group have been vocal about the government's violent crackdown on anti-regime protesters.

Thousands of people have been demonstrating in Bahrain since last month, part of a wave that has spread through North Africa and the Middle East.

On Saturday, U.S. Secretary of State Hillary Clinton called on Bahrain to allow its people to demonstrate peacefully as opposition members reported the death of a fifth protester.

"We have made clear that security alone cannot resolve the challenges facing Bahrain," Clinton said. "Violence is not and cannot be the answer. A political process is. We have raised our concerns about the current measures directly with Bahraini officials and will continue to do so."

The demonstrators were killed when Bahraini security forces cleared protesters from the Pearl Roundabout in the capital, Manama, on Tuesday. The roundabout had been a rallying site for anti-government demonstrators since the unrest began.

On Friday, the government demolished the landmark monument at the center of the traffic circle.