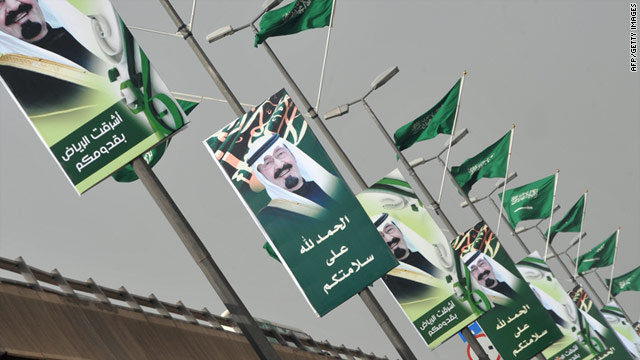 (CNN) -- Security forces in Saudi Arabia arrested several people demonstrating at the Interior Ministry Sunday, putting them in police cars and buses to take them away, witnesses said.

Around 100 men had gathered to protest at the government office in the capital Riyadh, said activist Mohammed Al-Qahtani and another witness who did not want to be named to protect his safety.

The demonstrators were demanding the release of imprisoned relatives, the second such protest in as many weeks.

"They arrested a lot of people," said Al-Qahtani. "They started putting them in police cars and even buses to take them away."

Police dispersed the rest of the crowd, chasing some down alleyways, the two people said.

The Saudi government did not immediately respond to CNN requests for comment.

Saudi Arabia has seen less unrest than many other Arab countries this year, but there have been a few small demonstrations amid growing dissatisfaction in the oil-rich U.S. ally.

Other than a pledge to set up an anti-corruption agency, the activists said, King Abdullah promised little to meet their demands. Instead, the long list of new measures simply expands powers for the kingdom and the religious establishment.

"I feel disappointed, to say the least," said one Saudi activist who did not give his name for fear of reprisals. "I do believe after these decrees, instead of sweeping reforms, they'll start sweeping up the activists. I'm afraid there will be a crackdown on activists here."

After the king made his rare short speech, his spokesman went on the air for more than half an hour to announce the list of reforms -- one of which involves sanctions for any member of the media who does not respect the views of Muslim scholars and the Quran.

Other measures promise billions of dollars in housing for Saudi citizens, new hospitals and medical centers, and the refurbishment of public spaces.

Al-Qahtani, of the Saudi Civil and Political Rights Association, said Friday the financial package was the easiest thing to propose.

"It's basically trying to buy out people so they won't go out into the streets," Al-Qahtani said. "It supports these repressive mechanisms."

Saudi Arabia, like other countries in the region, has seen increased demonstrations in recent months. Unlike other parts of the Middle East and North Africa, however, the demands of Saudi protesters are focused more on reforms and liberalization rather than demands for freedom or an end to the government's rule.

The long-time presidents of Egypt and Tunisia were toppled by protests this year, while the king of Jordan sacked his prime minister and appointed a new one. Libya has descended into civil war after opponents of leader Moammar Gadhafi took control of several cities, while security forces have attacked demonstrators in Bahrain.

Saudi King Abdullah promised $1,000 each month for job-seekers in the public and private sectors and vowed to speed up the job-seeking process.

About 60,000 jobs will be created at the Interior Ministry, the king's spokesman said, and the government will promote all officers throughout the military and security sectors "who deserve it." Military housing will also be upgraded, he said.

The spokesman said 500 jobs would be created at the Ministry of Commerce and Industry, which must speed up the punishment of anyone involved in price-tampering.