More than 100 people injured as demonstrators clash in Jordan 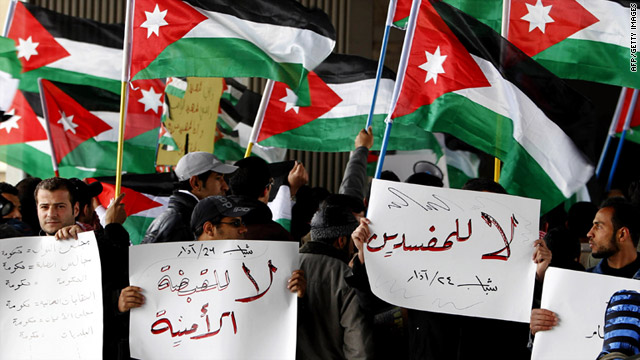 Dozens were injured as the two sides converged in a hail of rocks and swinging sticks, according to protest organizers and the government. The country's General Security Directorate said at least 62 citizens and 58 security force members, including two senior officers, were injured

One man died of a heart attack Friday, officials said. His cause of death is disputed by some protesters who claim he was beaten.

Government opponents and supporters chanted dueling slogans while police stood by, one organizer said. But officials say police tried to separate the two groups and were initially overwhelmed before they later regained control of the situation.

Several thousand protesters voiced their discontent with the government. The number included young people, writers, and artists as well as "normal and independent people," said Toleen Touq, one of the protesters. She described several waves of stone-throwing incidents.

Protesters gathered near Jamal Abed Alnasser square for the second consecutive day, calling for the dissolution of the parliament, an elected government, and constitutional reforms, according to Petra, the official Jordanian press agency.

"The sit-in will continue until our demands are met," the agency quoted protest organizers as saying.

The demonstrations parallel similar movements across the region, where governments have been confronted by throngs of protesters demanding reforms.

"Since this wave of protesters has swept across our region, we've had protests every Friday," said Jordanian Foreign Minister Nasser Judeh. "I think police were caught in between" the two groups, causing several officers to be injured.

"Things have gotten a little out of hand," he added. "But we have a leadership that initiates reform."

Many protesters advocate a constitutional monarchy and less power for the king; they also are angry about corruption and the privatization of some services, among other concerns, Tauq said.

Jordan's economy has been hit hard by the global economic downturn and rising commodity prices, and youth unemployment is high, as it is in Egypt, where demonstrations toppled longtime President Hosni Mubarak.

Officials close to the palace told CNN that King Abdullah II is trying to turn a regional upheaval into an opportunity for reform. He swore in a new government following anti-government protests.

The new administration has a mandate for political reform and is headed by a former general, with opposition and media figures among its ranks.

Jomana Karadsheh and Caroline Faraj contributed to this report