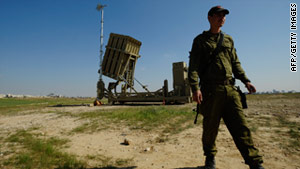 An Israeli soldier stands next to a launcher, part of the countyr's "Iron Dome" defense system.
STORY HIGHLIGHTS
RELATED TOPICS

Jerusalem (CNN) -- An Israeli airstrike in northern Gaza Sunday morning killed two Palestinians and injured three others, according to Israeli and Palestinian officials.

The latest airstrike marks the beginning of a second week of escalated violence between the two sides as Israel deployed its "Iron Dome" defense system in southern Israel Sunday. The deployment was part of the evaluation phase Israel Defense Forces is undertaking to check the system's effectiveness.

Israeli Air Force jets "identified a group of rocket launchers preparing to fire a rocket at the Israeli home front from the northern Gaza Strip, and thwarted the attempt by firing at them. A hit was confirmed," a spokesman said in a statement.

Hamas, the party that rules Gaza, confirmed the deaths and injuries on its website, saying the incident occurred in the Jabaliya camp in northern Gaza.

A statement from the Islamic Jihad militant group said Israel bears full responsibility for the bloodshed. "We fully blame the Zionist enemy for the continuing aggression and bloody attacks and their consequences," the statement said. "... we reaffirm our right in responding and defending against the occupation's continuous crimes against our own people and we call for the protection of our people in defense and resistance."

Four rockets were fired into southern Israel Friday and Saturday in the latest round of violence. One of them, a Qassam rocket, slammed into a house Friday night in the Eshkol regional council area, causing extensive damage.

"Hamas has lost control of other organizations within the Gaza Strip," Maj. Gen. Tal Russo, commander of the Israeli Southern Command, said in a visit to the damaged house. "There is anarchy among them and within Hamas itself. There's no authority over any facet and it's difficult for Hamas to regain control."

His comments came amid talk by Palestinian factions that they are prepared for a truce as long as Israel halts attacks on Gaza.

In a meeting between Palestinian factions Saturday in Gaza, they stressed they are committed to the truce and to refrain from escalating, Hamas' Interior Ministry said on its website.

"We are, of course, interested in quiet and security, and we have no interest in escalating the situation, but we won't hesitate to use the might of the IDF (Israel Defense Forces) against those who harm our civilians," said Israeli Prime Minister Benjamin Netanyahu.

Islamic Jihad, in its statement, said claims by Israel that it doesn't want to escalate the situation are "lies" aimed at misleading the public.

Since last Saturday, about 90 rockets have been fired into southern Israel and 12 Palestinians have been killed in retaliatory strikes, both airstrikes and artillery. Four of them were civilians, including an 11-year-old and a 16-year-old. The rest were militants.

In light of the increased rocket fire over the last week, including two Grad missiles into Beersheva, Israel's biggest southern city with a population of about 200,000 people, Israel deployed the first battery of its Israeli-developed "Iron Dome" defense system.

The system has been in development for years, and was still "in the evaluation stage on an operational level," according to Israel Defense Forces.

Brig. Maj. Gen. Doron Gavish, head of the Israeli Air Defense Force, spoke to reporters Sunday at a site where the system was deployed.

"Because of what we saw in the last week or two, we accelerated the phases, and now we are here ... this is what we are going to do for the next coming weeks," he said.

The system is a mobile defense solution for countering short-range rockets and artillery shells. Its aim is to identify and track incoming projectiles and strike them with a rocket before they hit. It is supposed to provide a partial answer to the short-range rockets being fired into southern Israel alongside shelters and military offensive measures, according to an Israel Defense Forces statement.

Gavish said the system is unique in that "there is no other system in the world which shoots missiles against rockets." He would not elaborate on the cost of firing the missiles, saying, "It is more important to understand if you didn't shoot something, what (the rocket) would hit. Our job is to make sure we would do everything to defend our population."

But Netanyahu told his Cabinet on Sunday that he does not want "to create the illusion that the Iron Dome system will give a whole or comprehensive response. It is still in the experimental stage, and in any case, we cannot deploy batteries to protect every house or school."