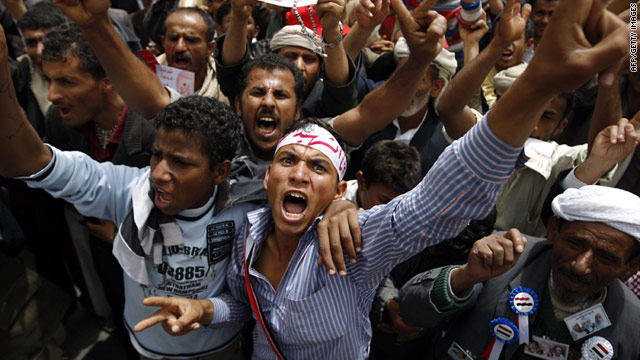 The reports came as President Ali Abdullah Saleh has been fighting to hold onto power, arguing that he is best equipped to lead the fight against Islamists.

On Sunday, seven Yemeni soldiers were killed and seven others were wounded when members of al Qaeda in the Arabian Peninsula attacked them in Mareb, two security officials said. The attack took place at a military checkpoint a mile north of the government complex in Mareb province, east of the capital, Sanaa.

The attackers also used grenades and machine guns, and took two military vehicles from the checkpoint, the security forces said.

After the fighting Saturday, the Yemeni government said it was a sign that strong measures are needed to combat instability within the country. Saba reported that Governor Saleh al-Zawari of Abyan province affirmed "the importance to enhance security performance to strictly confront any attempts to disturb security and stability in the governorate."

Yemen has been facing protests from people citing government corruption, a lack of political freedom and high unemployment.

Saleh said Sunday he will not offer any more concessions, and described the opposition as an alliance against the country's majority, according to Saba.

"I derive my strength from the people, not from the tank," Saleh was quoted as telling a session of the General People's Congress Standing Committee.

On Saturday, Saleh told an Arab television network that he is "ready to step down with respect and dignity, even within a two hours' notice."

Speaking to Al Arabiya, he also warned that some leadership factions in the opposition have a "foreign agenda."

"The people are afraid of the Islamists," he said, cautioning against the influence of groups like al Qaeda. "The Arab world, including the Yemeni people, are terrified of the possibility that the Islamists will take control."

He described himself as a "constitutional president" and the country as "a ticking bomb."

"Everyone needs to look at Somalia and learn," he added, describing his country's tribal roots and the need for compromise.

Opposition leaders rejected the president's comments. "Saleh has not learned a lesson from the millions who are demanding he step down," said Yaseen Noman, president of the JMP, the country's largest opposition bloc. "All the different initiatives and negotiations that take place are only there for Saleh to buy himself more time," he said.

"Saleh's lies show the world that he must leave power -- and people understand this," Noman added. "Our demands are simple: He must leave office. This is not open for negotiation."

Hamid Al-Ahmar of the opposition Islah Party said Sunday, "I frequently tell the youth and JMP that any negotiations with Saleh is a waste of time. He is like a snake, he never stays in the same spot."

Al-Ahmar said Saleh, during discussions between the government and opposition parties, temporarily agreed to transfer his powers to the vice president but then changed his mind. "This is usual from Saleh, and his words and promises have no value to us," Al-Ahmar said.

An official report on the meeting, in a Saba article, said nothing about an offer of transferring power to the vice president.

Another Saba reported quoted Saleh as saying Sunday, "Brothers in the opposition propose a condition that if the president departs power, he should not communicate with the people, and this reflects their fears."

On Friday, Saleh spoke to thousands at a pro-government demonstration in an effort to underscore his intentions to foster dialogue with anti-government protesters and make concessions to avoid bloodshed.

The embattled president said he would welcome either European mediators or those from the Gulf Cooperation Council to be impartial observers in the talks.

The country has been wracked by a Shiite Muslim uprising, a U.S.-aided crackdown on al Qaeda operatives and a looming shortage of water.

Saleh has been a staunch U.S. ally in the fight against al Qaeda in the Arabian Peninsula.

U.S. Defense Secretary Robert Gates was asked last week about how the United States sees cooperation with Yemen if Saleh were to step down.

"We have had a good working relationship with President Saleh," Gates told reporters during a trip to Cairo. "He's been an important ally in the counterterrorism arena. But clearly, there's a lot of unhappiness inside Yemen. And I think we will basically just continue to watch the situation. We haven't done any post-Saleh planning, if you will."

Saleh has said he accepts opposition demands for constitutional reforms and holding parliamentary elections by the end of the year.

He said in a written statement that he was "committed to undertaking all possible initiatives to reach a settlement" with the JMP bloc and "prevent any future bloodshed of the Yemeni people."

Saleh has also promised not to run for president in the next round of elections.

The president's standing weakened after some government officials and military officers declared their support for the opposition in the wake of a crackdown on protesters that left 52 people dead.

During Saturday's interview, Saleh said clashes had resulted in 41 deaths.

U.S. Secretary of State Hillary Clinton has called for full political dialogue in Yemen involving all players to find a peaceful solution.

The emergency law expands the government's powers of arrest, detention and censorship.