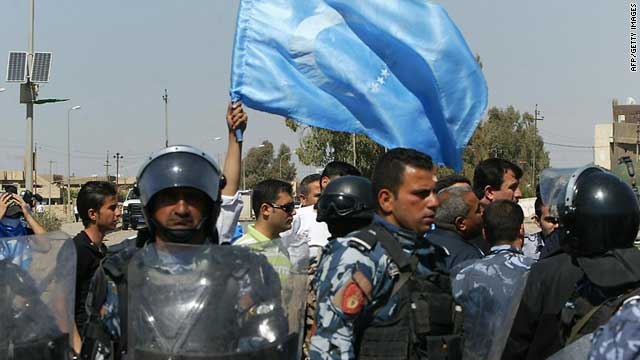 Baghdad (CNN) -- Gunmen set off bombs and stormed three jewelry stores in Baghdad on Monday, killing four people and stealing gold and cash in what government officials said may have been a heist to raise money for insurgents.

The deadly robberies were among a spate of incidents Monday that left a dozen people dead and many others wounded across the country, police and government officials said.

At least six robbers struck the jewelry stories in the al-Qahira neighborhood in northeastern Baghdad, killing four employees and wounding nine other people, according to Baghdad police.

The gunmen set off bombs to distract police before storming the stores, police said.

Insurgents may have carried out the robberies to fund their operations, Interior Ministry officials believe.

In violence elsewhere in Iraq, a roadside bomb struck a police patrol early Monday in Musayyaib, about 44 miles (70 kilometers) south of Baghdad, killing one officer and wounding four other people.

In Mosul, about 260 miles (420 kilometers) north of Baghdad, three gunmen stormed a house in al-Tanak district, killing a young man and six women who lived there, according to Mosul police. The motive behind the attack is unknown.

And in Kirkuk, about 149 miles (240 kilometers) north of Baghdad, Turkmen and Kurdish students clashed on the campus of the Technical Institute, resulting in six injuries.

Dozens of Turkmen students had rallied at the institute to protest against corruption and bad management in Kirkuk. Some of the students, who carried flags and banners of the Turkmen party, chanted slogans that provoked Kurdish students, police said.

Iraqi security forces entered the institute and brought the clashes to an end, according to Kirkuk police.