NATO: Libya mission will be to protect, not arm 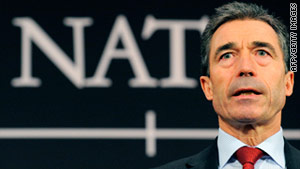 NATO Secretary General Anders Fogh Rasmussen: "We are there to protect civilians ... and that will be our focus."
STORY HIGHLIGHTS

Tune in to CNN tonight at 7 ET for live coverage of President Obama's speech on Libya . Then at 8 and 9 p.m., get expert analysis on "In the Arena" and "Piers Morgan Tonight" -- only on CNN.

The first NATO sorties to maintain the no-fly zone over Libya flew on Sunday, NATO officials said. The alliance is expected to be in complete command of the no-fly zone by the end of the day Monday.

The mission of protecting civilians is expected to be under full NATO control by the end of the week, they said.

By taking control of the full mission, NATO will allow the United States to step out of its lead role and more into a supporting one as requested by the Obama administration.

In an interview with CNN here at NATO headquarters, Anders Fogh Rasmussen said, "The U.N. mandate authorizes the enforcement of an arms embargo," and that NATO has decided to participate. "We are not in Libya to arm people, but to protect people," he said.

Obama to speak on Libya Monday

What does Obama need to say Monday?
RELATED TOPICS

The ambiguity of the U.N. Security Council Resolution about Libya has made for a wide range of opinion among nations about exactly the kind of intervention that is permitted in order to "protect civilians."

In an interview Sunday, U.S. Defense Secretary Robert Gates would not rule out the possibility of arming the rebels.

Some NATO sources acknowledged to CNN that they expect the scope of the rules of engagement to be more narrow than the coalition's thus far, but they caution that as the situation on the ground changes, so too will the character of the NATO mission.

"Our mandate is very clear: We are there to protect civilians against attacks, no more, no less, and that will be our focus," Rasmussen said. He was unwilling to further characterize the nature of the rules of engagement.

The rules of engagement and the use of force to protect civilians have been contentious issues as NATO sought consensus to take over the Libyan mission. Turkey and Germany were among a handful of alliance members that want a more strict interpretation of the U.N. mandate. France, in particular, had been seeking more latitude to further embolden the rebels to topple Moammar Gadhafi.

Rasmussen ruled out the possibility of any NATO member country carrying out a parallel campaign in Libya, including France.

"No, NATO is about solidarity, and the fact that NATO takes over the operation means that we have a unity of command" he said.