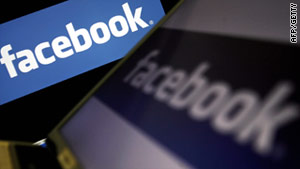 The Israeli government said it asked for the Facebook page to be pulled because it incited violence against Jews.
STORY HIGHLIGHTS
RELATED TOPICS

Jerusalem (CNN) -- A controversial Facebook page calling for another Palestinian intifada has been pulled off the social media website, following complaints from the Israeli government that it incited violence against Jews.

A statement from Facebook said the group page entitled the "Third Palestinian Intifada" -- which had garnered more than 350,000 "likes" over the course of the past month -- was removed from the website because it contained direct calls for violence.

"The page... began as a call for peaceful protest, even though it used a term that has been associated with violence in the past. In addition, the administrators initially removed comments that promoted violence," the company statement said. "However, after the publicity of the page, more comments deteriorated to direct calls for violence. Eventually, the administrators also participated in these calls. After administrators of the page received repeated warnings about posts that violated our policies, we removed the page.

"We continue to believe that people on Facebook should be able to express their opinions, and we don't typically take down content that speaks out against countries, religions, political entities, or ideas. However, we monitor pages that are reported to us and when they degrade to direct calls for violence or expressions of hate -- as occurred in this case -- we have and will continue to take them down," Facebook said.

A few other identically named pages have popped up since then, some with the same messages the previous page had.

The page's removal follows heavy criticism from the Israeli government and pro-Israel organizations that Facebook was ignoring its own terms-of-service guidelines, which prohibit the posting of content that is "hateful, threatening, or... incites violence."

Yuli Edelstein, Israel's minister of public diplomacy and diaspora affairs, said Tuesday in a statement that the removal of the page showed that "Facebook management understood that the page is a blunt abuse of freedom of speech to incite to violent actions."

"By taking this action, Facebook has now recognized an important standard to be applied when evaluating issues of non-compliance with its terms of service involving distinctions between incitement to violence and legitimate calls for collective expressions of opinion and action," said a statement Tuesday from Abraham H. Foxman, national director of the group. "As it continues to monitor its pages, Facebook should be able to apply this standard in response to complaints about other pages with similar content. We hope that they will continue to vigilantly monitor their pages for other groups that call for violence or terrorism against Jews and Israel."

Edelstein sent a letter to Facebook founder and chairman Mark Zuckerberg last week, complaining of content on the page that promoted "the killing of Israelis and Jews and the 'liberating' of Jerusalem and of Palestine through acts of violence."

"You are obviously aware of the site's great potential to rally the masses around good causes, and we are all thankful for that. However, such potential comes hand in hand with the ability to cause great harm such as in the case of the wild incitement," Edelstein's letter said.

Edelstein's office had said Monday it was satisfied with moves the social media giant had made in monitoring the site and removing objectionable content.

The Facebook page in question was set up in early March by a group of unidentified activists who called for a third intifada to start on May 15, a date known by Palestinians as the Nakba -- or catastrophe -- which commemorates the displacement of hundred of thousands of Palestinians from their homes in warfare that led to the establishment of Israel in 1948.

The word intifada -- which is literally translated as "shaking off" -- is popularly used to describe a revolt or rebellion. Palestinians have staged two intifadas, which began in 1987 and 2000 respectively. Violence surrounding the second intifada claimed the lives of thousands of Israelis and Palestinians.

In an administrative post, the activists wrote that the purpose of the page was to liberate Palestine and fight "against injustice, division, and corruption" following the protest movements in Tunisia, Egypt, and Libya.

In a March 24 post, the administrators said their approach was peaceful and that they were committed to maintaining freedom of expression. They also suggested it was not fair to single out their page when thousands of pages on the social media website contained similar content, and threatened a mass Muslim boycott of Facebook if the page was pulled down.