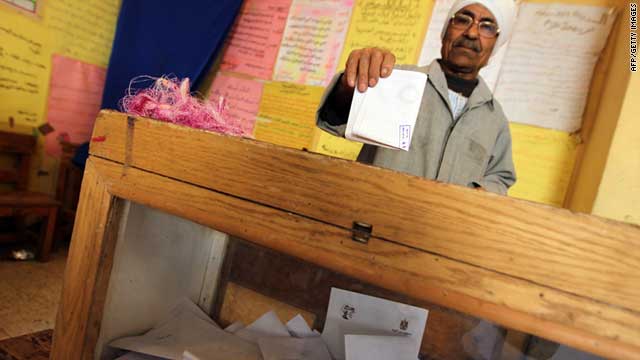 An Egyptian man casts his vote on constitutional changes at a polling station in Mansura on March 19, 2011.
STORY HIGHLIGHTS

This new working constitution will be in effect until a new one is drafted and approved.

General Mamdouh Shahin, a member of the Supreme Council of the Armed Forces, will give a news conference Wednesday morning to officially announce the constitutional declaration, that includes eight amended articles of which were endorsed in a historic referendum held on March 19.

The constitutional declaration, which will override the current 1971 constitution, will define the powers of the executive and judicial branches as well as institute laws to govern the presidential and parliamentarian election processes.

Islamists on the rise in Egypt?

The declaration is also expected to include articles about citizens' rights and freedoms.

On Monday, the nation's ruling military promised voters free parliamentarian elections that will happen in September after lifting emergency laws that have been in place since 1981 when ousted president Hosni Mubarak took power. The laws gave police overreaching powers to arrest anyone perceived as suspicious and detain them indefinitely without charges.

The military has taken several steps, since a popular uprising that forced Mubarak to resign in February, to show that it is easing harsh restrictions imposed under the late regime. Some of the steps were issuing a decree to make it easier to form political parties as well as limiting curfew hours to be from 2 a.m. to 5 a.m..

Although no date has been set yet for presidential elections, the military said they will occur sometime after voting in members of parliament.

The new president and parliament are expected to lead the process of forming a new constitution.