Can Syrians break the fear barrier? 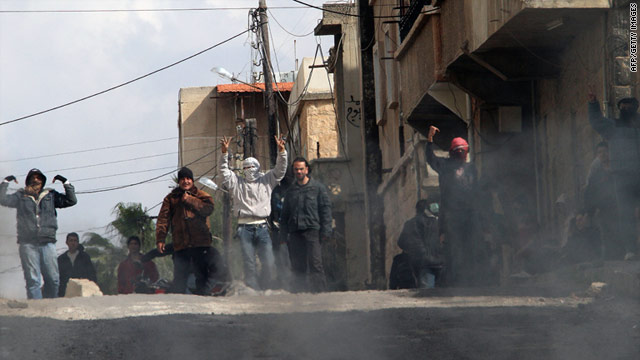 Anti-government protesters on the streets of Daraa, 100km south of the capital Damascus, on March 23
STORY HIGHLIGHTS

(CNN) -- Fear has been one of the biggest hurdles for those pushing for political change in Syria.

Recent protests in Syria are unprecedented in a country that has had a state of emergency in place since 1963. A Syrian government spokesman has indicated that the emergency laws may be lifted, but no timescale has been given.

Arbitrary arrests, intimidation, torture and travel bans are widespread, according to the British Foreign and Commonwealth Office. Amnesty International has urged President Bashar Al-Assad, in power since taking over from his father in 2000, to lift the country's "repressive laws."

At least 37 people have been killed in clashes between protesters and security forces, particularly in the cities of Daraa and Latakia in the past week, according to the United Nations Office of the High Commissioner of Human Rights.

Syrians try to cope with anxiety

While there are some signs that the fear barrier has begun to break down, many still feel scared to speak openly.

All people who know me ask me to stop writing because they love me and want me to be safe.
--Syrian blogger

A 26-year-old Syrian blogger, who spoke to CNN on condition of anonymity, said: "I disagree with protest, not because I'm with government, but because I know what the government will do and how it will deal with such thing, Daraa as an example. People know things will go bloody for sure."

He added: "Many Syrians have broken through a fear barrier in the past week, especially young people, but too many are still scared."

The blogger works mostly in Algeria, but is returning home to Syria this week. He said he would be clearing his laptop hard-drive and emptying his email account before arriving.

He said: "Recently I passed the red line a little bit on my blog. I started blogging on real social issues and the Syrian ministries. All people who know me ask me to stop writing because they love me and want me to be safe. I do feel threatened."

He estimated there was a 40% chance he would be arrested or detained for questioning when he returned to Syria this week.

The blogger said he noticed when he wrote on political issues, Syrians were too afraid to respond to his blog.

"Now it's very dangerous and a lot of people stop contacting me," he said. "They are afraid to put 'like' on Facebook. I know they are reading what I wrote because I see statistics."

A British journalist living and working in Damascus, who also spoke on condition of anonymity, said fear levels were still high.

People are still scared because we have all seen the response has been pretty brutal.
--British journalist in Syria
RELATED TOPICS

"There's a sense of tension as to whether there will be more bloodshed. People are still scared because we have all seen the response has been pretty brutal," he said.

"However, people are feeling a bit bolder. I wouldn't be surprised to see people talking a bit more openly about politics."

The journalist cut short his phone call with CNN because he was in a café and nervous of speaking in a public place. He said working as a journalist in Syria was difficult.

"Journalists are being clamped down on. Many have been arrested and others are stopped from going to certain places. We have to remain low-key about what we are doing," he said.

"Generally, Syrian journalists practice self-censorship to avoid getting into trouble. Foreign journalists risk being thrown out of the country. I write without bylines."

The British journalist added that he believed there would be some change.

Ribal Al-Assad, director of the London-based Organization for Democracy and Freedom in Syria, agrees that the fact that Syrians have taken to the streets in protest could create real change.

Al-Assad, a cousin of the Syrian president who has lived in exile since the age of nine, said: "I'm confident that things will change because the genie can't be put back in the bottle. We can't let this pass. Everybody in Syria has a satellite dish and they follow the news. They see how other people live around the world and they want to live better too.

"We will not accept any less than what our brothers in Egypt and Tunisia have. People are starving and they see the corruption of those around them."