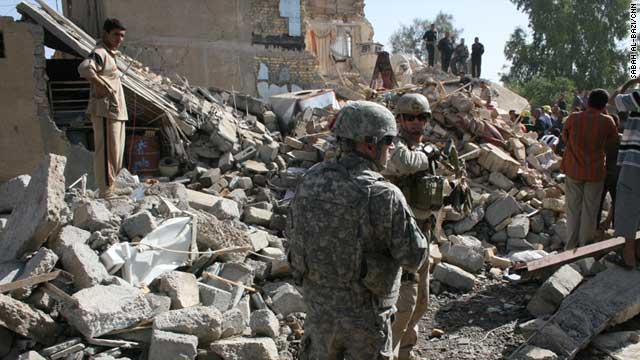 The incident occurred in the Anbar province city of Falluja, about 37 miles (60 km), west of Baghdad, Iraq's capital.

A suicide bomber detonated an explosive vest at a group of soldiers near an army post in the central part of the city.

Among the three dead was an Iraqi Army officer, Col. Khalid Abbass. At least three civilians were wounded.

Authorities imposed a curfew in central Falluja as a precaution against more attacks.

Falluja and the rest of Anbar province are predominantly Sunni Muslim, and the region endured much violence during the height of the war in Iraq.

Overall violence in Iraq has dropped dramatically since the peak of the sectarian violence between 2005 and 2007, but bombings and assassinations still occur.

On Tuesday in the Iraqi city of Tikrit, for example, 57 people were killed and 125 others were wounded when gunmen stormed the provincial council building. They detonated a car bomb outside the facility and killed many government officials and employees inside, an Interior Ministry official said.

There has been unrest in Iraq over corruption, lack of basic services, unemployment and restriction on freedom of expression -- grievances now being aired in other countries across the Arab world.

Iraqi security forces from the army and police force increased their presence in Baghdad and in a number of the provinces because of planned protests.