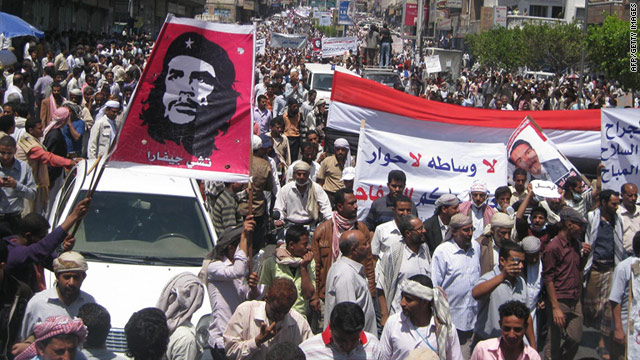 (CNN) -- The international community needs to step up and "play a more active role" in investigating the deaths of protesters in Yemen, Amnesty International said Wednesday.

Protests against President Ali Abdullah Saleh have left 94 dead over the past two months, most of them during "Bloody Friday" protests on March 18, the human rights organization said. The United Nations has put the toll at more than 100.

Amnesty International cited an eyewitness who said most of the protesters killed that day last month were shot in the head, chest and neck, and they were left to die at the scene.

"The Yemeni government has an abysmal record of failing to investigate or prosecute those responsible for unlawful killings and torture or other ill-treatment," said Philip Luther, Amnesty International's deputy director for Middle East and North Africa.

In its report "Moment of Truth for Yemen," Amnesty International criticized the government for failing to release details about its investigation into the "scores" of protester deaths from the live ammunition used to break up demonstrations.

Amnesty calls on Yemen's government to accept help from the international community to carry out independent investigations into those deaths. There was no immediate response to the report from the government.

Clashes between protesters and pro-government gangs continued Tuesday, with at least six killed and hundreds more injured, according to eyewitnesses and medical teams, as the Saleh's future remained uncertain.

The United States has no intention of stopping its military aid to Yemen despite the unrest, Pentagon spokesman Geoff Morrell said Tuesday. The aid, in support of Yemeni counterterrorism efforts, continues to be essential because of the "real threat" from al Qaeda in the country, he said.

Meanwhile, U.S. Defense Secretary Robert Gates arrived in neighboring Saudi Arabia on Wednesday to discuss bilateral relations with King Abdullah, although the unrest in Yemen is likely to be a topic of discussion.

Saudi Arabia and its partners in the Gulf Cooperation Council -- Kuwait, the United Arab Emirates, Oman, Qatar and Bahrain -- have been reaching out to Yemen this week to arrange a national dialogue on the situation there, according to a senior official in the Gulf region who wished to remain anonymous because of the sensitivity of the situation.

The mediation will try to bring all Yemeni factions together to hold talks, the official said.

The official stressed that the Yemeni people, not the council, "will decide themselves the future of their country."

"The government forces are killing us," said Abdullah Salem, a youth activist who was at the protest. "Saleh and his militia will not succeed, and every blood spilt will be accounted for in international courts."

In the city of Taiz, at least two anti-government protesters were killed when security forces and Republican Guards fired on protesters, according to medical teams. Hundreds of people were injured, 55 of them from gunshot wounds.

The security chief in Taiz denied his forces fired on demonstrators.

The violence comes as the United States is helping to mediate a transition out of office for Saleh, who has been facing popular protests for weeks, according to two Yemeni officials.

The timing is delicate, officials said, because they want to avoid any steps that could further destabilize Yemen or interrupt counterterrorism efforts.

The White House said Tuesday it "strongly condemns the use of violence by Yemeni government forces against demonstrators in Sanaa, Taiz and Hodeida in the past several days. The Yemeni people have a right to demonstrate peacefully, and we remind President Ali Abdullah Saleh of his responsibility to ensure the safety and security of Yemenis who are exercising their universal right to engage in political expression."

The statement called upon Yemen's government to investigate and hold those responsible accountable.

"The United States strongly supports the Yemeni people in their quest for greater opportunity and their pursuit of political and economic reform that will fulfill their aspirations," the statement said. "President Saleh needs to resolve the political impasse with the opposition so that meaningful political change can take place in the near term in an orderly and peaceful manner."

The U.N. human rights office Tuesday called on Yemen to halt the use of force against protesters. And British Foreign Secretary William Hague also said he was appalled by the reports of further deaths this week.

"In early March, President Saleh promised to maintain maximum restraint in the use of the Yemeni security forces in controlling peaceful demonstrations. We strongly urge him to keep that promise," he said.

Saleh offered to step down by the end of the year after constitutional reforms and new elections, but the opposition, led by the Joint Meeting Parties bloc, is demanding he leave immediately. A plan unveiled by the bloc Saturday called for Saleh to hand over all authority to Vice President Abdu Rabu Mansour Hadi in the interim. But Saleh is not offering any further concessions, and protests by the opposition continue.

U.S. officials said various groups, including al Qaeda and secessionist elements, are exploiting the political turbulence and splits within the military and security services for their own gain.

Saleh has been in power since 1978 and has been a staunch U.S. ally in the fight against al Qaeda in the Arabian Peninsula. Saleh argues he should remain in office because he is the only one who can effectively continue that fight against terrorism.