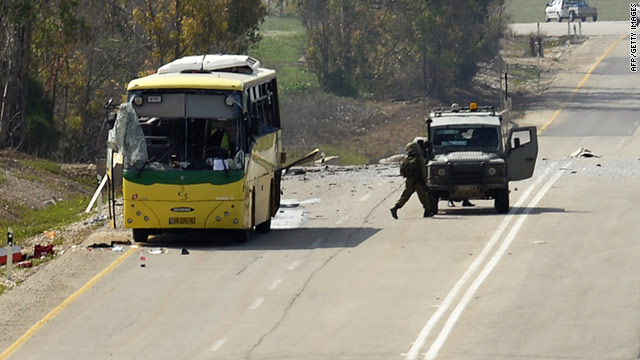 An Israeli teenager was wounded when militants fired a missile at an Israeli schoolbus traveling near the Gaza border.
STORY HIGHLIGHTS
RELATED TOPICS

(CNN) -- Hamas claimed responsibility Thursday for shooting a missile that struck an Israeli bus, critically wounding a teenage boy on his way home from school.

After not claiming responsibility for the attack earlier in the day, Hamas on Thursday night sent a message to reporters saying the strike was in retaliation for the killing of three Hamas leaders last weekend.

After the attack Thursday, and the firing of numerous mortars into Israel, the Israel Defense Forces "targeted nine terror-activity sites in the Gaza Strip," the IDF said in a news release. A military spokeswoman said later that IDF aircraft targeted three smuggling tunnels in southern Gaza in addition to the nine targets mentioned earlier.

The additional strikes hit shortly after a cease-fire, negotiated among Hamas and other Palestinian factions, was scheduled to take effect, according to Hamas' Interior Ministry.

Hamas said five people were killed and 45 were wounded in the earlier IDF strikes. One of the dead was Saleh Tarbin, a field commander for Hamas, the group said.

The school bus was traveling in southern Israel near the Gaza border when it was hit by a type of anti-tank missile known as a Kornet, said Israeli military spokesman Capt. Barak Raz. The Kornet is a Russian-made anti-tank guided missile system that is thought to have a maximum range of 5 1/2 kilometers (3 1/2 miles).

A 13-year-old boy was the only passenger on the bus at the time, said Avital Leibovitch, spokeswoman for the IDF.

The boy is in critical condition, and the driver has moderate wounds, the IDF said.

An IDF statement later in the day listed the boy's age as 16.

It was not immediately known if the bus was targeted, but Leibovitch said it looked like "a direct hit."

Fifteen rockets and mortars were fired into Israel in one hour alone Thursday, the IDF said.

An Israeli military official, who spoke on the condition of anonymity, said the Thursday attack was launched from a location about 3 1/2 kilometers away from the bus. There was an attempt to fire a second missile after emergency personnel had responded to the scene, the official said. For reasons unknown to the IDF, the second launch failed.

According to the military source, the use of the Kornet is worrying to the IDF because it is a sophisticated rocket system that requires extensive and hands-on training to master.

Israeli Defense Minister Ehud Barak "instructed the IDF to quickly take all necessary measures and respond to the terrorist attack," a statement from his office said. "He added that he holds Hamas responsible for all terrorist attacks emanating from the Gaza Strip."

Hamas controls the Palestinian government in Gaza. Listed as a terrorist organization by the United States, Hamas has carried out dozens of terrorist attacks killing Israelis and others.

A Hamas spokesman in Gaza, Fauzi Barhum, said, "The resistance movement's response to the enemy's massacre comes as self-defense, and to protect the citizens. It aims to pressure the occupier to stop committing crimes."

The IDF's Leibovitch said the attack was part of "ongoing terror directed against innocent Israeli civilians" emanating from Gaza.

The IDF said that in the past Palestinian militants have fired anti-tank weapons only at Israeli military targets. This is the first time Palestinians have been known to fire one at a civilian target, an IDF spokesman said.

Hamas said its forces fired mortars and machine guns in response to the Israel attacks.

The IDF, in a news release, said its aircraft and artillery forces "targeted two terrorist squads who were involved in firing military-use projectiles at the Israeli home front," and that "hits were confirmed."

"Additionally, artillery forces returned fire at the area in the northern Gaza Strip from which the anti-tank missile that hit a school bus was fired," the IDF said.

The IDF said this week that it has seen an increase in terrorist strikes into the country, counting 128 in March, compared with 61 in February and 83 in January.

"This is a despicable and cowardly act that stands in stark contrast to people's desire for peaceful reform across the region. Violence will never deliver peace. I reiterate that Hamas must halt these strikes immediately, and rein in other militant factions in Gaza," said Hague, adding that he is also concerned about reports of deaths in retaliatory strikes.

A spokesperson for Ban said he is concerned about the escalating violence and called for "maximum restraint."