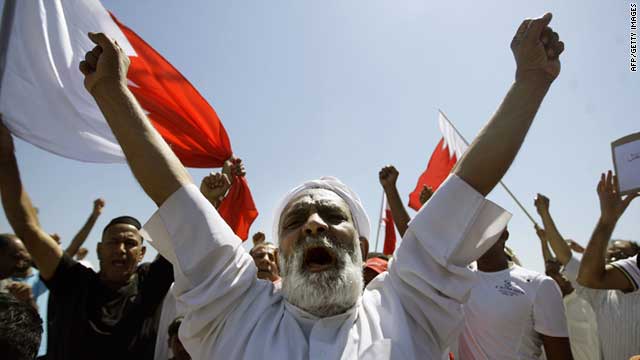 Bahrainis at the funeral of Issa Abdali Radhi last month in Sitra, who died during a crackdown on anti-government protesters.
STORY HIGHLIGHTS
RELATED TOPICS

Human Rights Watch demanded Friday that the country account for those who have been detained following anti-government protests and free anyone arrested arbitrarily.

"Bahrain has created a state of fear, not a state of safety," said Joe Stork, deputy Middle East director at Human Rights Watch.

Detainees have been beaten and otherwise abused, some told Human Rights Watch after being freed.

The group said at least 430 people had been detained since anti-government protests began on February 14, citing the opposition Wefaq party as the source of the number.

Human Rights Watch said it had been in touch with the families of a dozen missing people.

"Health facilities are used as bait to identify and arrest those who dare seek treatment," said Latifa Ayada, the organization's medical coordinator. The group is also known by its French name, Medecins Sans Frontieres.

"Wounds, especially those inflicted by distinctive police and military gunfire, are used to identify people for arrest, and the denial of medical care is being used by Bahraini authorities to deter people from protesting," she said as Doctors Without Borders released a report into the phenomenon.

The country's crown prince defended the government's actions in a speech on Thursday.

"We were immensely concerned that some of our youth were pushed towards a destructive path and that the nation was drawn along with them," Prince Salman bin Hamad al-Khalifa said, according to an official transcript.

"We took necessary action to preserve lives and the livelihood and interests of all the people, based on our commitment to Islamic and Arab values," he said.

"The problem escalated beyond all limits. Freedoms were misused and overtaken by extremists and their agenda," he argued.

It called in Saudi and other regional troops to help end the protests last month.