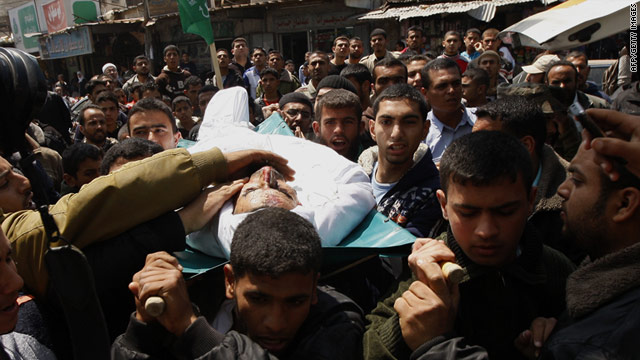 In the latest fighting on Saturday, Israeli air force struck and killed three Hamas personnel in southern Gaza, according to both the Israeli military and Palestinian medics. The Israel Defense Forces said the people were a senior Hamas military wing leader and his two bodyguards.

In another incident, a Palestinian man died of wounds in an early evening airstrike in the Zeitoun area of Gaza City.

About 42 rockets and mortars had been fired into Israel on Saturday, including 10 longer-range Grad rockets, but no injuries have been reported, said Israeli police spokesman Micky Rosenfeld.

The IDF said in a statement about 50 rockets and mortars were fired at Israel since Saturday morning.

The developments are the latest in a three-day tide of intensified violence that began on Thursday, when Hamas militants attacked an Israeli school bus that critically wounded a 16-year-old boy and prompted Israeli retaliatory strikes against fighters in Gaza.

The three-day death toll in Gaza rose to at least 18, 10 militants and eight civilians. Since Thursday, Palestinian militants have fired dozens of mortars and rockets into southern Israel.

On Friday, Israeli Prime Minister Benjamin Netanyahu said the attack on a civilian bus "crossed the line" and that "whoever tries to hurt and murder children will have no immunity."

The mounting death toll in Gaza represents the highest number of Palestinian casualties since the 2008-09 Israeli military offensive, when more than a thousand Palestinians were killed.

The offensive was prompted by daily missile bombardments from Gaza into southern Israeli communities, which Israel intended to end.

Now, there is increasing speculation in both Israeli and Palestinian media that another large-scale Israeli military operation could be launched soon.

In a Friday letter to the U.N. Security Council, Riyad Mansour -- permanent observer of Palestine to the United Nations -- charged Israel with using "indiscriminate and excessive force" and asked for the world body to intervene to "prevent the slaughter of more innocent civilians."

A Hamas official vowed Saturday to widen the scope of the group's attacks on Israel if Netanyahu did not agree to halt airstrikes on Gaza.

Hamas spokesman Sami Abu Zuhri blamed Israel for the surge in violence and said Hamas would do what was needed to protect Palestinians in Gaza.

Abu Obeida, spokesman for the Hamas military wing, the Ezzedeen Al-Qassam Brigades, told reporters in Gaza City on Saturday that his group would continue to wage a fight until Palestinians cast off the Israeli occupation and wrested away their lands.

He said it was impossible to speak about any sort of calm between Hamas and Israel while there was aggression being committed against the Palestinian people.

Israeli officials have cited various precautions to avert casualties. They include early warning systems, road closures near the Gaza border and the use of bomb shelters, Rosenfeld said.

The Israeli military said Saturday that its newly deployed anti-rocket defense system known as the Iron Dome successfully intercepted Grad rockets that had been fired from Gaza Friday and Saturday. Over the past 48 hours, "terrorist organizations" in Gaza have fired more than 120 Grad missiles, rockets and mortars at Israel, the IDF said.

In a statement released Saturday, the Israeli military said it "continued striking terror sites in the Gaza Strip" in coordination with Israel's domestic security agency, the Shin Bet.