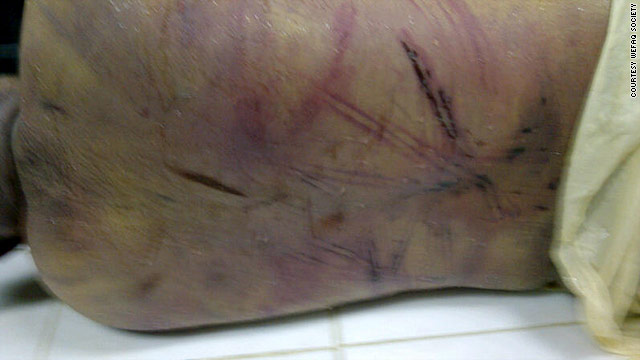 Nabeel Rajab is accused of fabricating this photo of Isa Saquer, who was reportedly tortured and killed in police custody.
STORY HIGHLIGHTS

(CNN) -- The president of Bahrain's Center for Human Rights was referred Sunday to Bahrain's military prosecutor for publishing a photograph of a protester who died in custody that officials say he fabricated.

Nabeel Rajab published on his Facebook page images of a man identified as Ali Isa Saqer. The man in the picture has multiple cuts on his front and back and heavy bruising across his body and face.

Saqer, 31, died at a detention center Saturday, according to the general director of Muharraq Governorate Police. He was being held on charges of attempted murder of policemen while trying to run them over with his car on March 13.

Authorities said Saqer was creating chaos at the detention center, and when security forces sought to subdue him, he resisted them and sustained various injuries in the process. He was sent to the hospital, where he later died.

But Rajab and other activists say the photographs of Saqer show he was tortured and killed while in police custody.

'The torture was so bad'

"Yes, I have published a picture but this picture was not fabricated. It was an actual picture of a man who had marks on his body from torture," said Rajab.

In a statement on its website, Bahrain's Interior Ministry said the photograph Rajab published is different from the one taken in the presence of a medical examiner after Saqer's death.

The ministry published two photos it also said were of Saqer.

The face of the man in the ministry's photos was blacked out and it was impossible for CNN to independently confirm whether the ministry's images and Rajab's photographs were of the same man.

In the ministry's photographs, minor cuts and bruising can be seen, but nothing suggesting the abuse the photographs posted by Rajab imply.

A CNN documentary film team recently went to Bahrain, one of the United State's strongest allies in the Middle East, to work on a piece about internet bloggers, activists and the revolutions spreading across the Arab world.

The group had arranged a series of interviews, but most of the sources who had agreed to talk had since disappeared. Family members or others close to the sources said they had been arrested or gone into hiding after security forces raided their homes and threatened them.

While reporting the story, the CNN team was detained by security forces in the street outside Rajab's house. Members of the group were questioned for six hours and released, but warned not to film anything else without permission.

Rajab, who was arrested last month, said that the government is engaged in a campaign of intimidation against him and other activists.

"They said that they were looking for a suspect who was armed and thought I might know him," Rajab said. "They beat me, punched me, kicked me, handcuffed me. Blindfolded me."

The government confirmed Rajab was arrested but did not provide additional details.

Bahrain, where the U.S. Navy anchors its Fifth Fleet, is a small predominantly Shiite country governed by a Sunni royal family.

It called in Saudi Arabia and other regional troops to help end the protests last month.

"I think this is the cost of the human rights work that I do," Rajab said shortly after news of his impending legal battle broke. "I knew that what I am doing is costly and it could cost me my life or my family life and this is the price we are paying for our work as a human rights activist in the region," he said.

CNN's Amber Lyon and Salma Abdelaziz contributed to this report.