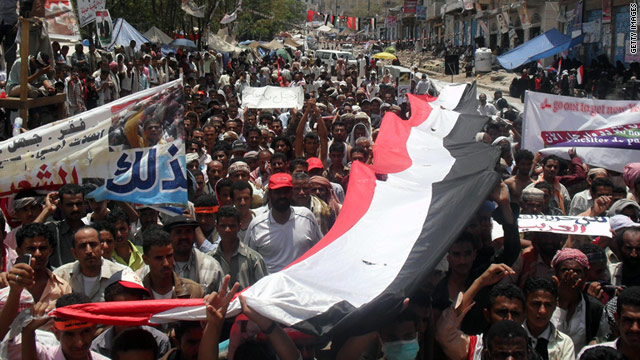 (CNN) -- A proposal by a coalition of Persian Gulf nations to decrease tensions between the government and the opposition in Yemen may have done just the opposite.

One day after the Gulf Cooperation Council released a statement urging Yemen President Ali Abdullah Saleh to transfer powers to his vice president, thousands of protestors returned to the streets Monday for marches and opposition leaders are vowing not to back down.

One eyewitness claims protesters number in the tens of thousands at a anti-Saleh march in Abyan province. CNN could not independently verify the estimate.

"The youth protesting today are being used by the JMP who are trying to steal the revolution from them," Abdu Ganadi, deputy minister of information for the GCC said Monday.

The Joint Meeting Parties bloc, Yemen's largest opposition group, said the GCC initiative "does not clearly state that Saleh must step down and only focuses on Saleh's transferring power."

"We all know the VP is not strong and will never be able to tell Saleh no, even if all his powers are transferred," said senior JMP official Hasan Zaid.

The Embassy of the Republic of Yemen in Washington responded to the GCC initiative on Monday in a statement which said Saleh has agreed to transfer powers in accordance with the Yemeni Constitution, which means he will not step down from power until his term ends in 2013.

"We will not accept any initiative that will have Saleh still in rule whether the initiative is from the GCC or Europe," Zaid said.

The GCC, a six-nation bloc of oil producing countries, met on Sunday in the Saudi Arabian capital, Riyadh, in an effort bring an end to the current political impasse in the country.

"The opposition wants everything and President Saleh is still the most powerful person in the country," GCC's Ganadi said.

"The opposition is now the one going against the GCC initiative," said Ganadi.

A leading revolutionary attending a march on Monday in Sanaa spoke out against the coalition's proposal.

"The youth are not involved in any agreement and in the end, we have the powerful voice," said Khaled Anesi. "No initiative will save Saleh from the crimes he committed against the peaceful youth," Anesi said.

In addition to pushing the transfer of power, the GCC's initiative also called for the formation of a national unity government to be chaired by the opposition.

There was no mention of that proposal in the statement released by the Yemen government.

Last week, Saleh said he welcomes the council's efforts to help resolve the political crisis in his country. He has said he intends to step down but only under a peaceful and constitutional transition process.

Despite increasing pressure from neighboring countries and opposition groups, the Yemeni government has said calling for Saleh's departure now is going too far.

Yemen's president has promised not to run in the next round of elections.

The United States, which has been allied with the Saleh government in its fight against al Qaeda in the Arabian Peninsula, has welcomed past Gulf council initiatives.

"We strongly encourage all sides to engage in this urgently needed dialogue to reach a solution supported by the Yemeni people," Mark Toner, spokesman for the U.S. State Department, said Friday.

"President Saleh has publicly expressed his willingness to engage in a peaceful transition of power; the timing and form of this transition should be identified through negotiation and begin soon."

Violence and protest have raged in Yemen, where protesters have called for the ouster of Saleh. He has ruled the country since 1978.

An eyewitness claims hundreds of protesters attended an anti-government march in streets of Sanaa, and other cities across Yemen.

"We will not be scared to march and make the regime understand that we will not stop until our demands are met," student activist Hareth Abdullah said.

"Every day we increase in power and the regime decreases in power," Abdullah said.

High unemployment fuels much of the anger among a growing young population who have suffered from poverty. The protesters also cite government corruption and a lack of political freedom.

"We will not differ with the revolution youth and we will support them," Yahya Abu Osbaa, a senior JMP official said. "In the end, I can assure you that we will agree on terms," Osbaa said.