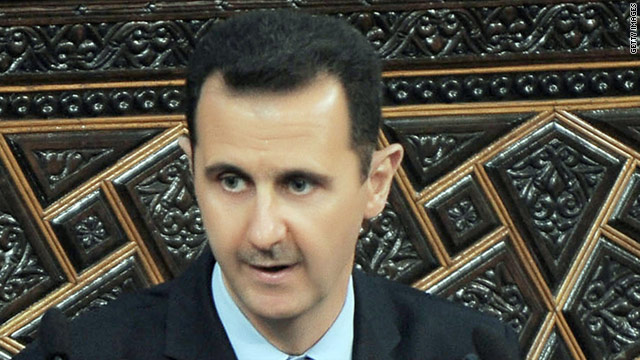 Violence in Syrian cities unfolded a day before President Bashar al-Assad called for Syria's state of emergency to be lifted.
STORY HIGHLIGHTS

(CNN) -- In separate incidents, Syrian security forces opened fire on protesters in Homs and mourners at a funeral in Talbisa Sunday, killing seven people and injuring more than 50, an opposition source told CNN.

In Homs, the source said thousands of protesters demanding reform were surrounded by security forces. They attacked demonstrators, firing live ammunition and tear gas into the crowds, the source said. He said three people were killed and 13 others injured in the clash.

In the nearby town of Talbisa, the source said four people were killed and more than 40 wounded when security forces opened fire on mourners at a funeral.

A second opposition source told CNN three people died in Talbisa and two others in Homs, when clashes broke out between police and protesters who were trying to get to Talbisa.

It was not immediately clear whether the two opposition sources reported the same deaths or whether they were talking about separate incidents. CNN could not independently confirm the accounts.

Syrian state news reported that one policeman was killed and 11 other security workers injured Sunday when a "group of armed criminals opened fire on them in the town of Talbisa near Homs." Three members of the "armed groups" were killed and 15 wounded, the Syrian Arab News Agency said.

The violence unfolded just one day after Syrian President Bashar al-Assad urged the new Cabinet to lift the country's state of emergency, which has been in effect since 1963.

Opposition forces have been demanding the repeal of the emergency law, which allows the government to make preventive arrests and override constitutional and penal code statutes. The law also bars detainees who haven't been charged from filing court complaints or from having a lawyer present during interrogations.

Anti-government protests began in mid-March, with unrest first centering in the Daraa region and later spreading to other parts of the country.

Scores of people have died, and al-Assad's government has been criticized for the lethal force used against protesters.

Al-Assad said Saturday that an investigation committee is looking into the recent deaths and sent his condolences to the families of those killed during the unrest.