Arrests made in slaying of Israeli family in West Bank 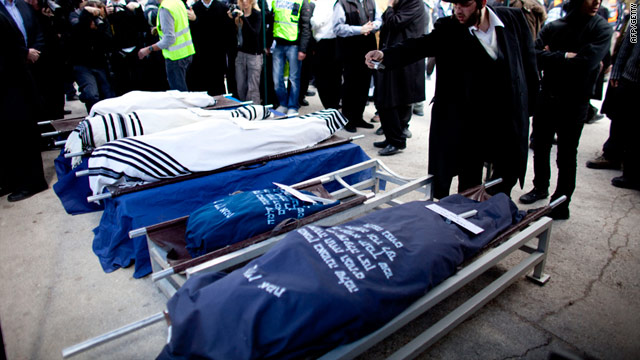 Mourners attend the funeral of Udi and Ruth Fogel and their three children on March 13 in Jerusalem.
STORY HIGHLIGHTS
RELATED TOPICS

(CNN) -- The Israel Defense Forces arrested two people it identified as responsible for the massacre of an Israeli family in the West Bank settlement of Itamar, officials said Sunday.

The two suspects, Amjad Awad. 19. and Hakim Awad, 28, were caught in the nearby Palestinian village of Awarta, Israeli General Security Services said. Six others have been arrested for helping them.

The pair are accused of killing Udi and Ruth Fogel and three of their children last month. The children were ages 11 years, 4 years and 3 months.

The two men were members of the Popular Front for the Liberation of Palestine, but acted independently, the security services said. They decided on the attack a few days before the killings, the officials said.

According to the investigation, the pair were unsuccessful in an initial attempt to acquire a gun, but on the night of the killings broke into an empty house in the settlement and stole an M-16 rifle.

They entered the Fogel's home and stabbed two of the children, before struggling with the parents and stabbing and shooting them, the security services said. They fled the house, fearing the shots would have been heard, but then returned to steal another weapon and stabbed the baby, the officials said.

"For the country, the fact that we promised and carried out the promise is witness to the fact that no such murder will ever leave our daily agenda," Israeli Prime Minister Benjamin Netanyahu said Sunday. "We will get to such murderers whereever they are. This expresses our obligation to the idea of justice and our security."

The IDF continues to search for more perpetrators of the killing of the Fogel family, an IDF spokesman said.

"The murders of five family members including a 3-month (old) baby constitute a crossing of all red lines," Lt. Col. Avital Leibovich said. "The IDF has invested in numerous operational and intelligence efforts, and has worked closely with other security forces in order to find those responsible for this vicious murder."

The day after the five members of the Fogel family were killed, Israel approved the construction of several hundred housing units in the West Bank.

Three Fogel children survived, including a 12-year-old daughter who was not home, and two younger children whose room the killers apparently did not notice.