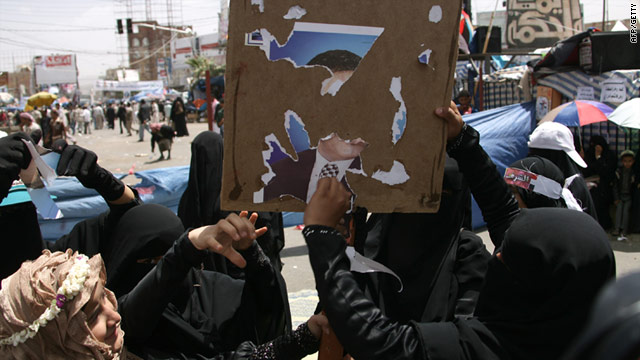 (CNN) -- For the second day in a row, thousands of Yemeni women took to the streets in several of the country's provinces to condemn remarks made by President Ali Abdullah Saleh -- comments they saw as an attack on their honor.

In a short speech given to his supporters on Friday, Saleh said women who were protesting against his regime were violating Yemeni cultural norms that prohibit women mixing with men who are not direct relatives. He called it forbidden behavior in Islam and advised women to stay home.

Demonstrations were organized across Yemen on Sunday, in what was being called the "Day of Honor and Dignity".

"Look Saleh, at the power of women," said Raiofa Nasser, a female activist who took part in Sunday's march in Sanaa, the country's capital. "Many women were avoiding the protests, but since Saleh's verbal attack on women, we will not go home and will continue protesting until he is forced to leave the presidency."

In addition to Sanaa, women also marched Sunday in the provinces of Shabwa, Dhammar, Baitha, Taiz and Ibb, showing how angry they were at Saleh for what they saw as an insult to their dignity.

"Even conservative women will join the protests now, to prove to anyone who doubts that women will take part in Yemen's future rule," said Salma Sabra, a human rights activist in Aden. "Women have always been strong in Yemen, and we will not accept being degraded by our ruler."

Women took to the streets in 10 of Yemen's provinces on Saturday as well, holding firm on their demands that Saleh step down. Prominent activist Tawakkol Karman said Saleh was shocked to see women leading Yemen's revolt.

"Saleh has finally shown the world his real face and his hatred against women," said Karman, a leading member of Islah, the largest opposition party in Yemen. Karman said Saleh is scared he will be known as the leader overthrown by women.

The government, meanwhile, said protesters had "misused" Saleh's comments, prompted by a belief that the opposition was using women and youth to promote their own agenda, and not the greater good of Yemen.

"Saleh is the first to support women's rights and has always shown interest in involving women in Yemeni politics," said Zaid Thari, a senior member of the ruling General People's Congress party. "Saleh was advising protesters and not acting against women in specific."

Anti-government demonstrators in Yemen have been calling for reforms and the ouster of Saleh for many weeks. Recently, women have shown their faces in greater numbers.

"Saleh's comments against the purity of women protesters are a clear indication that his oppressive regime does not respect any rights of expression and wants women to be led by men at all times," said Mohammed Sabri, a senior bloc official.

Even the conservative tribal coalition of Mareb and Jawf warned Saleh against attacking women's rights, saying that tribal culture has always given women the right to lead if they so desire.

"Women ruled Yemen numerous times in the past with success," said Ali Obaid, a senior member of the coalition. "Yemeni women lead the Yemeni revolution and men follow."

Saleh met with women leaders in the capital on Sunday, according to the state-run news agency Saba.

The news agency did not identify the women who participated in the meeting but it described them as expressing "their appreciation for encouragement, care and support provided by the president to women in the country."

Saleh was quoted by the news agency as telling the women, "When we talked and said why mixing, that is because of our worry about our daughters, sisters and mothers from mob and anarchists."