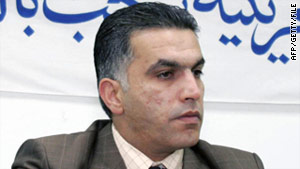 (CNN) -- A Human Rights Watch official is calling on the government of Bahrain to investigate a Monday morning teargas attack on the Bani Jamra home of prominent activist Nabeel Rajab.

The attack took place at 3:30 a.m., according to Human Rights Watch. Rajab, who heads the Bahrain Center for Human Rights, was apparently not injured. However, the attack by unknown assailants caused "great distress" for his 78-year-old mother, who suffers from respiratory disease, Human Rights Watch said.

There was no immediate response to the Human Right Watch statement by the Bahrain government.

The country is ruled by the Al-Khalifa family, which has been in power since the 18th century. Many protesters are calling for the removal of the royal family, whom they blame for the country's high unemployment rate and for running a corrupt government that relies on torture and other harsh measures to clamp down on dissent.

Rajab's vocal opposition to the government's violent crackdown on anti-regime protesters has made him a target.

On March 20, about 25 people in about a dozen cars pulled up to Rajab's house and took him to the offices of the Interior Ministry's investigative department. There, according to Rajab, he was beaten, blindfolded, and interrogated about an armed suspect they believed he knew.

The government confirmed the arrest but provided no other details.

Nine days ago, officials publicly accused Rajab of fabricating photos posted on his Facebook site of the body of Ali Isa Ibrahim Saqer, who died in detention on April 9. The photos showed slash marks all over the victim's back and other signs of physical abuse. A Human Rights Watch researcher saw Saqer's body just prior to his burial and said the photos were accurate.

Human Rights Watch said it knows of no other entity than Bahrain's security forces that have access to the kind of grenades used in the attack on Rajab's home.

Rajab, according to Human Rights Watch, said that markings on the grenades show they were manufactured in Pennsylvania.

Rajab, the organization stated, said everyone in the two houses that belong to the family was sleeping at the time. Rajab, according to Human Rights Watch, said the assailants tossed the grenades over a high wall surrounding his and his mother's houses.

Rajab is one of hundreds of Bahrainis to be arrested by security forces in recent weeks. The arrests, according to human rights activists, have often been violent and have taken place at night.

Others arrested include Mohammed al-Tajer, a prominent defense attorney for various opposition figures. Al-Tajer was seized during a Friday raid on his home by more than two dozen uniformed and plainclothes officers. There was no reason given for his arrest, Human Rights Watch said.

After the arrest, Zainab Al-Khawaja launched a hunger strike to protest the assault and detention of her father and her husband. She was taken to a hospital Sunday after her health had deteriorated so much that she could not talk or move, Rajab said.

However, the woman was released after refusing an intravenous tube, a human rights activist told CNN.