In Syria, a protest on a campus, a top dissident seized 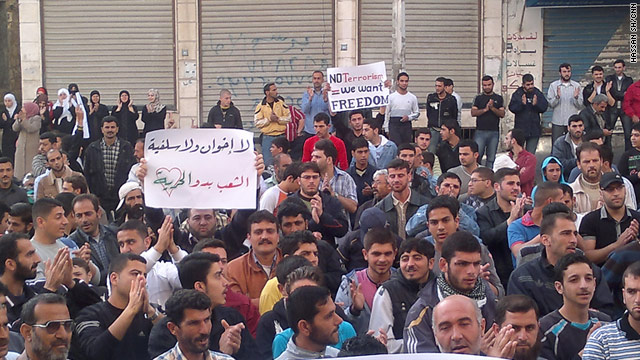 Syria has witnessed a number of pro-democracy demonstrations, such as this one in Banias, in recent weeks.
STORY HIGHLIGHTS

(CNN) -- A protest erupted in Syria's largest city Wednesday after government warnings against public gatherings, and security forces seized a top dissident even as the regime took steps to lift the country's emergency law.

Demonstrations occurred in Aleppo, Syria's largest city, witnesses said, and are expected to be held in Daraa, the southern town where anti-government sentiment started last month before spreading across the country.

Wissam Tarif, a human rights activist, said witnesses in Aleppo told him that a couple hundred people demonstrated at the University of Aleppo and chanted anti-government slogans.

Video supplied to CNN appears to confirm this violence, but the authenticity of the imagery and the eyewitness accounts can't be independently confirmed.

The demonstration took place after the Interior Ministry on Tuesday called on people to refrain from holding public gatherings.

In Daraa, a doctor told CNN that 5,000 people are expected to gather in the main square for a demonstration Wednesday evening.

Community leaders have given speeches and protesters have shouted anti-government messages almost daily since Friday. The speeches often encourage demonstrators to continue their efforts non-violently.

"We strongly condemn the ongoing violence committed against peaceful protesters by the Syrian government," U.S. Secretary of State Hillary Clinton said Wednesday while meeting with Haitian President-elect Michel Martelly. "We have been consistent ever since the events of the last months have begun and have continued. We are calling for an end to violence, we are calling for the peaceful protests and a political process that can respond to the legitimate needs, interests and aspirations of the people of the region."

Issa had been imprisoned from 1992 to 2000 for belonging to the Communist Labor Party, and was held from 2006 to 2009 for signing the Damascus-Beirut Declaration, a petition signed by nearly 300 Syrian and Lebanese intellectuals calling for the normalization of relations between their countries.

The Syrian Observatory for Human Rights demanded that Syrian authorities immediately release Issa, as well as all prisoners of conscience in Syrian prisons and detention centers.

It also urged the regime to stop arbitrary detention of political opponents and civil and human rights activists.

Syria's Cabinet approved abolishing the country's state-of-emergency law hours before Issa was seized. President Bashar al-Assad -- who has promised to pursue reforms and tamp down civil instability -- has to give the final approval for the move.

The step is among several measures in legislative decrees approved by Syria's recently appointed Council of Ministers.

Opposition forces have been demanding the repeal of the 48-year-old emergency law, which allows the government to make preventive arrests and override constitutional and penal code statutes.

The law also bars detainees who haven't been charged from filing court complaints or from having a lawyer present during interrogations.

The Cabinet also approved a legislative decree to require citizens to obtain permits for demonstrations, which have always been permitted in Syria.

It also approved "a draft decree to cancel the Supreme State Security Court," a special court that prosecutes people regarded as challenging the government.