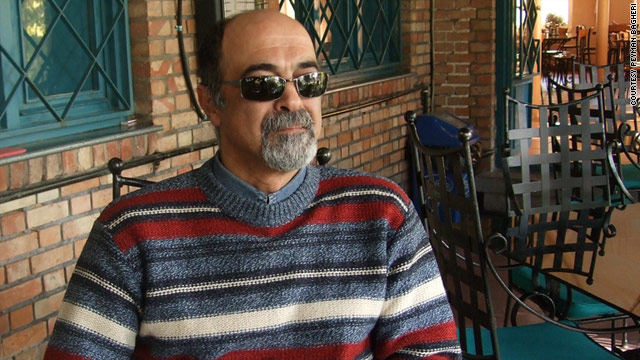 (CNN) -- Recent protests in Iran have failed to gain traction -- despite growing demonstrations in neighboring countries and Iran's own 2009 massive protest movement.

What's the status of the Iranian opposition movement, what challenges does it face and could a regime change ever happen peacefully? A blogger from Iran weighs in.

Peyman Bagheri is a blogger whose articles against the Iranian government have prompted him to flee his native land for fear of being arrested and imprisoned. He recently spoke via phone from Europe with CNN's Asieh Namdar.

Are you surprised the revolutions in Tunisia and Egypt failed to galvanize Iranian activists to take to the streets on levels similar to what we saw in 2009? What's the status of the opposition movement in Iran?
The bitter reality is Iranians are more worried about the economy, jobs and putting food on the table for their families. The economy is in shambles. It's difficult for Iranians to think about protesting and putting their lives at risk, when they are just trying to survive. Many are barely making it. Simply put, the events seen around the world are taking a back burner to real issues at home.

What's the biggest problem with Iran's opposition movement?
The biggest problem is that there is no clear leader who can unite and please everyone. Even among activists, there's no consensus on how to move forward. No unity, no organization. But the movement has been successful in some ways. The regime has weakened, and facing political, social and economic crisis. I think it's just a matter of time that this regime will collapse.

Ahmadinejad: The West to blame for regional unrest

When do you think that could happen?
Nobody knows for sure. Right now it's going downhill. Internally, there's a lot of division and infighting among high-ranking leaders. The system is starting to fall apart from within. In my opinion, when it happens, regime change in Iran will not happen peacefully. In most cases, autocratic regimes and dictators can't share power with anyone. They are paranoid, and paranoia leads to more repression.

Why did you flee from Iran this year?
I've written more than 50 articles against the government in the past two years. Somebody didn't like my blogs. I was threatened on the phone. The person who called said he'd report me to the government if I continued my writing. I don't know who it was. My home was under surveillance, I felt I was a target. I said to myself, "It's time to go."

Tell us about the open letter you wrote on one of your blogs to Iran's Supreme Leader Ayatollah Ali Khamenei.
It was one of the most visited blog posts I've ever written. I questioned the legitimacy of his leadership, and the human rights abuses. I asked him "what kind of leader are you?" I wrote about how, while he might be able to rule with terror and fear, that won't last forever because he doesn't have people's hearts on his side.

Do you know any bloggers who are in jail now?
I know of two. [One] was sentenced to 15 years in jail in 2009. [Another] vanished a month ago; no one has heard of him. He's probably in jail. Bloggers, if caught, normally get up to 20 years. Between 60 and 70 bloggers are currently in jail awaiting trials.

Iranian media covered events in Egypt with praise -- but no mention of the protests in Syria why?
Iran and Syria are powerful allies. Iran will not condemn the crackdown, and in this case even acknowledge them. The two countries have deep roots, are very close. You won't find news about Syria on state-run TV, since it's all filtered. Egypt had very close ties with the U.S. so no surprise for Iran to call government critics and protesters there "heroes."

What needs to happen for us to see a peaceful change towards secular democracy in Iran?
In my opinion, change in Iran can't happen peacefully. Dictators fight till the end. The only peaceful option is reform within the system. But real reform could mean the beginning of the end for this regime. This is why the government can't accept any kind of genuine reform. It would open the door to bigger things, maybe another revolt.

Do you want to return to Iran someday?
Yes, but not now. They'll arrest and throw me in jail. The regime is threatened by bloggers like me, who're spreading the message through words and blogs. They are afraid of their intellectual influence on people. They see us as a huge threat. ... As long as this government is in power, I will not see my homeland. I should add four of my blogs are completely shutdown --- I can't access any of them. For the government, this is absolute proof of my guilt.

In one sentence, can you give us a glimpse of life in Iran for the younger generation?
I can describe it in two words: "hell" and "hopelessness."