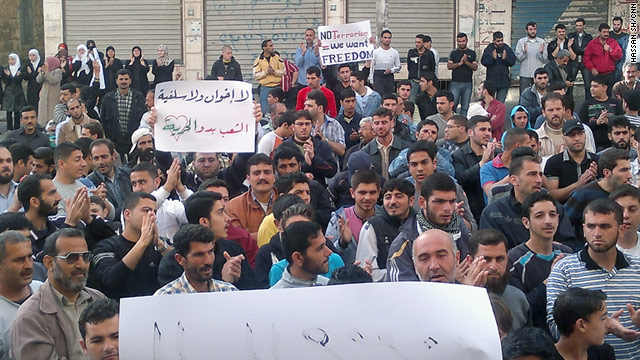 Protesters gathered to demonstrate against the government of Bashar al-Assad on Tuesday, April 19 in Banias.
STORY HIGHLIGHTS

But human rights activists question the government's intentions to follow through on reform because of the stiff police crackdown on peaceful protests.

President Bashar al-Assad issued a decree that tosses out the emergency law, a major demand of opposition members.

He also abolished the Higher State Security Court, a special court that prosecutes people regarded as challenging the government, another measure hated by opposition forces.

Al-Assad also issued a decree "regulating the right to peaceful protest, as one of the basic human rights guaranteed by the Syrian Constitution."

Despite the changes, there've been continuing clashes and tensions between security forces and protesters, who have taken to the streets since mid-March with a variety of grievances. Scores have died in bloody confrontations.

Groups like Amnesty International have welcomed the government's moves to lift the state of emergency and abolish the "notoriously unfair" security court that the 1963 emergency law "spawned."

The emergency law permitted the government to make preventive arrests and override constitutional and penal code statutes. The law barred detainees who haven't been charged from filing court complaints or from having a lawyer present during interrogations.

But, "the concessions now being made by the government have been achieved at a very heavy cost in human lives," Malcolm Smart, Amnesty International's director for the Middle East and North Africa, said on Tuesday when the Cabinet passed the decrees.

"There must be no more slaughter. Syria's president must take firm action now to stop the bloody crackdown by his security forces and ensure that those responsible for it are held to account."

"President Bashar al-Assad should match his action in lifting the emergency by establishing an immediate independent investigation into the unlawful killings and other violations committed by his forces, and by providing reparation to the victims," Smart added.

Demonstrators are demanding other changes, such as releasing political prisoners, lifting travel bans, and the right to establish independent political parties, said Najati Tayara, an activist in Homs.

Tayara, who says he hasn't been part of the demonstrations, is the spokesman for the Homs Center for Citizenship, a movement he said was recently created by young people from different backgrounds.

The group is calling for more freedom and a multi-party system in a society now controlled by the Baath Party.

Meanwhile, a new governor of Homs was appointed by the Syrian government. Al-Assad swore in Ghassan Abdul-Aal Thursday, according to the Syrian Arab News Agency.

There have been public protests, clashes between demonstrators and security forces, arrests, and reports of deaths in the city of Homs.

Tayara told CNN the situation in Homs is quiet Thursday, but he noted that demonstrations have been staged on Fridays in recent weeks. He said there's no security presence in the city but there are security forces on the outskirts of impoverished neighborhoods.

U.S. Secretary of State Hillary Clinton singled out the region Wednesday in comments to reporters about Syria. She urged the governor to end violence, stop "arbitrary arrests, detentions, and torture of prisoners" and "begin a serious political process."

"We are particularly concerned about the situation in Homs, where multiple reports suggest violence and casualties among both civilians and government personnel," she said.

Abdul-Aal succeeds Mohammed Iyad Ghazal, who was relieved from his job after protests and citizen complaints, according to the Syrian Days website.

They chanted "Allah, Syria, Freedom," but did not talk about toppling the regime.

The demonstrators were taken into custody at the University of Aleppo, said Ammar Qurabi of the National Organization for Human Rights.