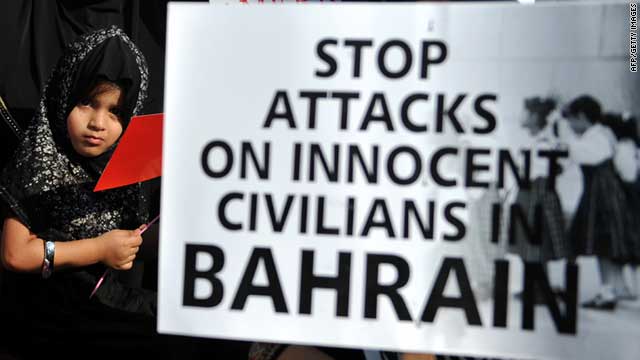 An Indian child stands next to a placard during a protest against the political turmoil in Bahrain in Mumbai on March 25, 2011.
STORY HIGHLIGHTS
RELATED TOPICS

(CNN) -- Bahrain's ambassador to the United States denies claims by human rights groups that authorities have raided hospitals and tortured doctors and patients in an effort to quell protests.

Physicians for Human Rights on Friday joined the chorus of organizations that have charged Bahraini security officials with targeting doctors and patients.

"The excessive use of force against unarmed civilians, patients in hospitals and medical personnel that PHR's investigators documented is extremely troubling and is cause for an immediate international investigation," said Hans Hogrefe, a director with the organization.

Ambassador Houda Nonoo said Friday the kingdom is committed to maintaining order and protecting the safety of its citizens.

"Bahrain has not targeted or attacked doctors or patients," she said in a written statement. "Medical facilities are operating normally in Bahrain following a significant period of disruption because of the protest movement."

Physicians for Human Rights, a group that shared the 1997 Nobel Peace Prize for its efforts to ban landmines, says it sent investigators to the gulf kingdom and interviewed 45 patients, doctors, nurses and witnesses.

This report echoes reports released earlier this month by Human Rights Watch and Doctors Without Borders.

The country's crown prince defended the government's actions in a speech earlier this month.

"We were immensely concerned that some of our youth were pushed towards a destructive path and that the nation was drawn along with them," Prince Salman bin Hamad al-Khalifa said, according to an official transcript.

"We took necessary action to preserve lives and the livelihood and interests of all the people, based on our commitment to Islamic and Arab values," he said.

"The problem escalated beyond all limits. Freedoms were misused and overtaken by extremists and their agenda," he said.

The attacks documented in their report could breach international law, which "dictates noninterference with medical services in times of civil unrest," Physicians for Human Rights said.

"Although every attack we documented is troubling, attacks on medical professionals are particularly disturbing because they also impact the five, 10 or 15 people that could have been helped or treated by that doctor, nurse, or medic," said Richard Sollom, deputy director of the group and author of the report.

Prior to action taken by police to secure the hospital, Nonoo said, Salmaniya Medical Complex "was used as a coordination center by protesters and had been overrun by political and sectarian activity, severely interrupting services and endangering lives."

"During this period, patients were refused treatment on the basis of their sect or ethnicity and emergency calls were neglected," Nonoo continued. "The hospital grounds were barricaded and Salmaniya was very clearly no longer a neutral, medical establishment. As a result, the action to secure the hospital was both unavoidable and necessary. Since this action took place, no patient has been refused treatment and admissions have continued. In order to maintain peace and continue our return to normalcy, we encourage all sides to work together now in an effort to air grievances and find solutions."