Hackers group says it will target Iran on Sunday 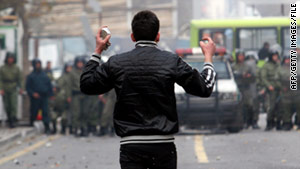 (CNN) -- The Internet hackers group Anonymous plans to hack Iran on Sunday, according to a press release published on their website. The group wants to use International Workers' Day, which commemorates the first national general strike in the United States, as an opportunity to reignite last year's protests in Iran.

Exactly how they intend to "attack" Iran remains to be seen. The sophistication of their previous attacks ranges from the denial-of-service overloading of web servers (this simply knocks a website out) to the exploitation of code and accessing of private data (more like the hacking seen in the movies).

The announcement follows news from the Bahrain News Agency that Iranian hackers had tried to access the Housing Ministry's database regarding those who benefit from the housing services.

The group Anonymous is known for its volunteer association with the perceived underdogs, the side that comes under pressure from the authorities, its statement said, and it views the people of Iran as the next step in the wave of revolutions passing through the Middle East and North Africa.