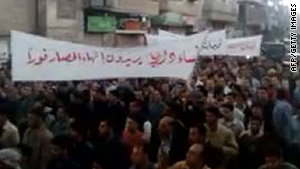 Istanbul, Turkey (CNN) -- About 250 people raced across the Syrian border into Turkey, government officials said Saturday, a flight that reflects the fear and violence gripping the Arab nation.

The people hustled to the southern Turkish Yaylidagi district in Hatay province on Friday afternoon, according to local and federal government officials.

Turkish Foreign Ministry spokesman Selcuk Unal said the government is trying to determine more about the people and how and why they chose to leave Syria.

"They just came to the border post and want to go in without passports. They were let in," Unal said. "We are trying to figure out whether this is an individual event or the tip of the iceberg."

Yaylidagi Mayor Mustafa Kemal Dagistanli and another local government official, who asked not to be named, said the people are Syrian citizens and Muslims.

The local official said most of the people are ethnic Turkmens, and three of them speak Turkish. Most of them are from Qamishli, in the northeastern region, and Latakia, on the western coast.

The official said the people say they've been persecuted by the government of President Bashar al-Assad -- now locked in confrontation across the country with anti-government protesters.

"The group is mostly young, there are women and children among them," the official said. "They are in good health condition. There are no health problems."

The military, the local government and the Red Crescent are assisting them with tents and food.