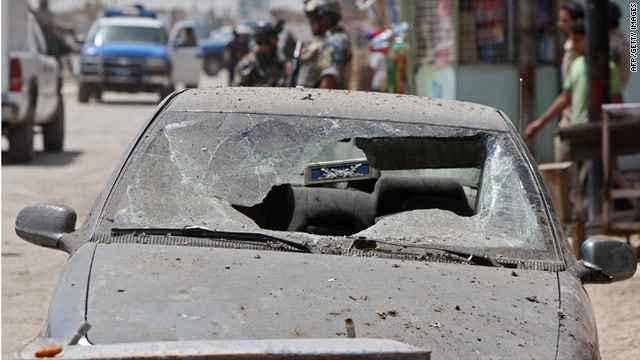 A sticky bomb attached to a car in the al-Dora district of Baghdad killed a municipal worker.
STORY HIGHLIGHTS
RELATED TOPICS

Baghdad (CNN) -- Twelve Iraqis were killed and 37 others were wounded Tuesday in five separate explosions across the Iraqi capital, according to Interior Ministry officials.

The first attack was a "sticky bomb" which was attached to a vehicle belonging to Iraq's Ministry of Trade. The device exploded on a highway in eastern Baghdad, killing the driver and critically wounding the ministry's director general, Ismaeil Hassan.

About 420 km north of Baghdad, a police officer named Col. Eid al-jabouri was killed and four others were wounded when a roadside bomb exploded in central Mosul.

In al-Dora district in southern Baghdad, a municipal worker named Basma Fatah was killed when a "sticky bomb" attached to her car exploded while she was driving on a nearby highway.

Overall, violence is down in Iraq from high peaks between 2005 and 2007. Yet assassinations, bomb explosions, gunfire and mortar attacks remain regular occurrences across the country.