Washington tries to resolve standoff at Camp Ashraf in Iraq 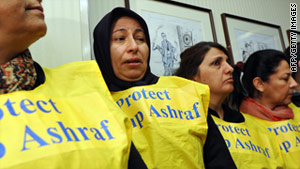 Relatives of residents of Camp Ashraf in Iraq at a press conference in Washington on April 8.
STORY HIGHLIGHTS
RELATED TOPICS

Washington (CNN) -- Calling the situation "untenable," a senior State Department official gave details Thursday of a proposed "humanitarian" solution to the standoff over Iraq's Camp Ashraf, a settlement of Iranian dissidents who say they will be killed if they are returned to Iran.

Under the U.S. plan, the approximately 3,400 residents of Ashraf would be temporarily relocated within Iraq, farther from the border with Iran, the official said.

The camp houses followers and members of the Mojahedin-e Khalq Organization (MEK). The United States considers it to be a terrorist organization.

The MEK has opposed the Iranian government for decades, and the group was sheltered in that camp and other locations in Iraq during the era of Iraqi leader Saddam Hussein.

The group was used by Hussein as part of his security forces and has a tense relationship with many Iraqis, especially Shias and Kurds.

The relocation would be temporary, the official said, with final settlement of the inhabitants in other countries.

That would not include the United States, the official said, since U.S. law bars anyone associated with a terrorist organization from settling there.

The new location would be "chosen and maintained and operated" by Iraq and appropriate humanitarian conditions would have to be maintained in this camp, the official said.

Iraq has ordered the camp be closed by the end of the year and wants the residents to leave the country. The residents are refusing to budge, and do not recognize Iraqi sovereignty over their camp.

The U.S. plan has been presented to the Iraqi government, the official said, and it is "reviewing its position."

The United States has discussed its proposal with the international community, this official said.

The violence, the official said, highlights the vulnerability of the camp's residents, who lack any legal status in Iraq but have refused to request refugee status.

"Given the history of mutual provocation we are deeply concerned about the possibility of future violence," the official said.

The U.S. would work to guarantee the safety of all sides, the official said, but this would not involve American troops.

"There's no easy solution to this matter," the official said. "We believe this is the best way forward ... our bottom line is that both sides need to step back from violence and the violence that has characterized the relationship, and we want to avoid another tragedy at Ashraf."

Iraq under Saddam and Iran fought a bloody war in the 1980s.

Since the U.S.-led invasion in 2003, relations between Iran and Iraq have improved. A majority of Iraq's new government is composed of Shiite Muslims, the majority religion in Iraq, and official attitudes toward the MEK changed.

The camp has been the subject of debate in Iraq since American forces relinquished control of it in 2009.

Tehran considers the MEK to be a terrorist outfit. The European Union does not.

Another State Department official said the department is reviewing the Foreign Terrorist Organization designation of the MEK, with a final decision to be made by Secretary of State Hillary Clinton on whether to maintain or rescind it. The MEK is providing information for the review, the official told CNN.