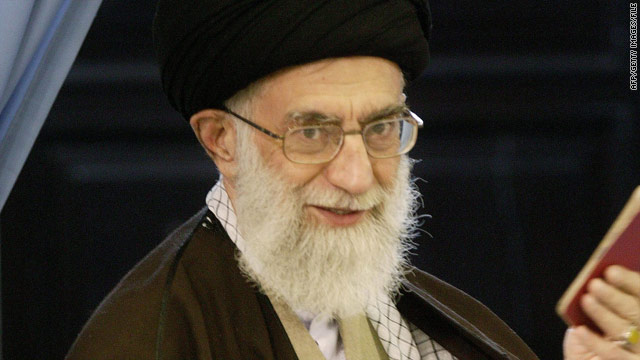 "He runs the country and he is infused with fanaticism," Netanyahu told CNN, arguing that Iran's supreme leader was more worrying than its president, Mahmoud Ahmadinejad, as the Islamic republic pursues a controversial nuclear program.

Ever-tighter U.S. and international sanctions against Iran must be backed up by the threat of force, he insisted.

"Those sanctions might work if the international community makes it clear that there is a credible military option if sanctions don't work," he said.

The death of bin Laden weakens extremists worldwide, Netanyahu said. "When the world's number one terrorist... is brought to justice and eliminated, it tells terrorists everywhere there's a price and you will pay it, and that's good."

The Israeli prime minister said he has not seen the photos of bin Laden dead, but he's not concerned by that.

"I don't think anyone is really questioning that Osama bin Laden has been killed," he asserted.

The White House is not planning to release photos it has of the al Qaeda leader after the raid that killed him this week, President Barack Obama said Wednesday.

One photo shows a gunshot wound to the head above the left eye, with the skull partially blown away, according to two sources who have seen a photograph of bin Laden's body.

Netanyahu also expressed cautious optimism about the "Arab Spring" revolutions that have shaken the region, but warned they could be hijacked by extremists, as was the case with the 1917 Russian revolution and 1979 Iranian revolution.

"Something very big is happening here, a convulsion... We would like to see the triumph of democracy... that's something that will guarantee the peace," he said.

But he also warned that the instability could cut both ways.

He refused to be drawn on whether Syrian President Bashar al-Assad should resign as the country's security forces clamp down on protesters.

But, he said, "this butchering of civilians must stop now."

Amnesty International says at least 542 people were killed in a month and a half of protests in Syria, and blamed the tactics of Syrian security forces for the deaths.

Netanyahu spoke to CNN in London, where he's holding meetings in an effort to convince the international community not to recognize any Palestinian government that might include Hamas. Wednesday, Hamas and Fatah formally adopted a reconciliation agreement that calls for a caretaker government to be established until elections are held next year. Netanyahu is due to meet Obama in Washington on May 20, the White House announced Wednesday.