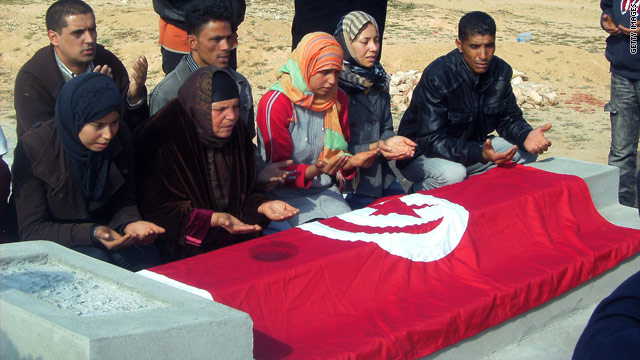 (CNN) -- Mohamed Bouazizi -- the Tunisian fruit and vegetable seller who inspired uprisings across the Arab world when he set himself on fire -- is to be the subject of a movie.

Bouazizi was an unlicensed fruit and vegetable seller trying to make a living amid desperate economic times in the Tunisian city of Sidi Bouzid. When police tried to stop him trading he turned his despair into protest by setting himself on fire.

Now, Tunisian movie producer Tarak Ben Ammar plans to make a feature film about the life and death of Bouazizi.

Ben Ammar, who was shooting his latest film -- starring Antonio Banderas and Freida Pinto -- in Tunisia when the revolution started, said he was approached by Bouazizi's family after they were inundated by worldwide media.

Backstage on film set in Tunisia

Making films, not war, in Tunisia

He said: "They really approached me. They were so surrounded by media and people who came to exploit them that they called the only Tunisian producer internationally well-known -- myself -- asking for advice, so I protected them.

"I took them away from the village where they lived and I put them in a house not far from where I am to protect them, and together we thought 'What film should be done?'"

He said he would donate all revenue from the film to the family for a fund to help other young people like Bouazizi.

Ammar said: "He is a hero without wanting to be a hero. We make this film to show that there are so many other Bouazizis out there that we don't know their name."

He added: "This was a just a young man. He was not an educated man and he was living off selling vegetables and fruits. He, like many others, was the symbol of miscommunication, of corruption, of bureaucracy, of a political system that would not listen to their youth when they needed a help.

"Since he was a young boy he always helped his family, he was always the one caring for everybody else."

Ammar, 61, is nephew of Tunisia's first ever president Habib Bouguiba. He is also one of the Arab world's best-known movie producers, involved in films including "Life of Brian" and "Hannibal Rising."

He said he wanted to make sure Bouazizi was remembered by future generations as a hero who gave his life to inspire others to push for change.

In his destruction of his own life he woke up a nation.
--Tarak Ben Ammar, Tunisian film producer
RELATED TOPICS

"In the Christian world, Catholics believe that Christ gave his life for the sins of humanity, of other men. Certainly I don't pretend that Bouazizi is compared to Christ, but what I mean is that he gave his life so that we woke up."

Ammar was filming "Black Gold" -- a movie depicting family rivalries among Bedouin tribes in the 1930s, when oil was discovered in the region -- in January, when the events began that led to the downfall of president Zine el Abedine Ben Ali.

At the time, CNN's Inside the Middle East team was also on the set shooting a documentary about the making of the film. As the CNN team left to report on the uprising elsewhere in the country, the film's crew and cast continued to work, even when rioting spread to the nearby town of Hammamet.

On the set, there were about 40 Tunisian actors working alongside the foreign leads, including Banderas and Pinto, 250 Tunisian crew members and 50 foreign crew members.

Ammar said: "The mood was very emotional, the solidarity that came about."

He said, despite being offered the chance to leave, the film's foreign actors were determined to keep filming.

"They were living a peaceful revolution in a country that had greeted them, welcomed them, that they loved," he said.

Ammar added that people from villages surrounding the studios came out to protect them from any violence.

He said: "Two thousand of these young men and women came and protected the studios and the cast from eventual militia of Ben Ali who were looting and creating violence."

Ammar said he was now optimistic for the future of Tunisia, but that it would need investment from Europe, America and wealthy Arab countries, such as the United Arab Emirates and Qatar.

He said: "I am very optimistic, because this country had the courage to throw a dictator out without violence, without destroying the country, without burning."