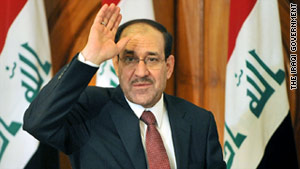 Baghdad (CNN) -- Iraqi Prime Minister Nuri al-Maliki said Wednesday he will meet with Iraqi political leaders by the end of the month to get their opinions on whether some U.S troops should remain in the country after December, when they are slated to leave.

"This is a big national issue, and it needs a national consensus," he told reporters at his office here.

Asked whether he would support an extension of U.S. forces in Iraq, he would not answer. "Do you want me to say this word simply like this?" he said, declining to answer directly. "Whole countries have failed to do so and you want me to say it before I gather the national consensus. Try another one."

Adm. Mike Mullen, chairman of the U.S. Joint Chiefs of Staff, said in April that Iraqi officials have not asked the Obama administration to delay the planned withdrawal. Any discussion about a change in the timetable would be considered, he indicated, but would need to begin soon.

Al-Maliki said the White House would need to know by August.

The prospect of U.S. forces remaining into next year is controversial. Last month, radical Shiite cleric Muqtada al-Sadr announced in a statement read by another cleric on his behalf that he would "escalate armed resistance and lift the freeze on (the) Mehdi Army" if U.S. forces were to remain. His reference to lifting the freeze referred to the August 2007 suspension of activities by the Mehdi Army, which is al-Sadr's militia.

If al-Sadr and his militia oppose an extension, they should submit their reasons for doing so, al-Maliki said. "We should accept on what we agree on and on what we don't agree on," he said.

But al-Maliki warned that unanimity was not likely. If 70% or 80% of Iraqis were to say yes to an extension of U.S. forces beyond 2011, then "the rest should accept this decision," he said.

Their alternative is to withdraw from the political process "and practice their role as they see it afterward in accordance with the law and the constitution," he said.