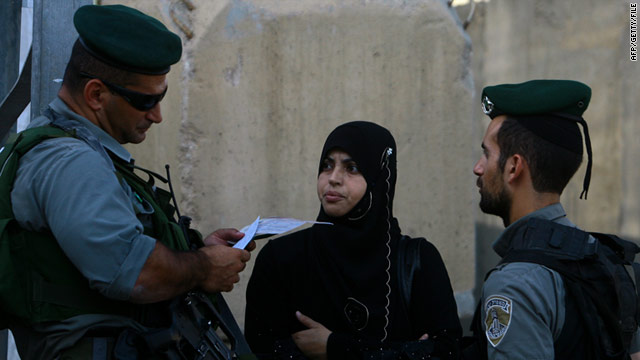 An Israeli border guard checks the ID of a Palestinian woman at a checkpoint on the outskirts of Bethlehem in August 2010.
STORY HIGHLIGHTS
RELATED TOPICS

Jerusalem (CNN) -- The Israeli government has acknowledged that it pursued a policy of stripping West Bank Palestinians of their residency status between the years 1967 and 1994, according to an Israeli human rights organization.

A new report by Hamoked: Centre for the Defence of the Individual has published a letter from the Israeli military's West Bank legal adviser revealing that over the course of 27 years, some 140,000 Palestinians who left the West Bank had their residency revoked.

The letter, which was provided in response to a freedom of information request made by Hamoked, details the policy used under the military census up until 1994, in which Palestinian residents wishing to travel abroad had to leave their residency cards at the border crossing. Tey were then issued an "exit card," which was valid for three years, with the option to extend its validity three times for a year at a time. If the resident did not return six months after their "exit card" finally expired, they were listed as "No Longer Resident," citing the fact that they had moved the center of their lives abroad.

The military letter also details the criteria for revoking the "No Longer Resident" status and reinstating residency through agreements with the Palestinian Authority, but that procedure was very limited in scope.

Hamoked cites on its website that in using this policy, Israel stripped residency from more than a tenth of the population in the West Bank, simply because they left the West Bank for more than three years.

The policy of marking residents who live abroad as "No Longer Residents" expired in 1994 with the signing of the Oslo Accords.

Palestinians who have their residency revoked are not entitled to live legally in the West Bank and many are separated from family members still residing there.

Palestinian official Saeb Erakat said in a statement that the report confirmed Palestinians' claims that Israel is following a "systematic policy of displacement in order to gain land for the expansion of more settlement-colonies and to change the demographic composition of the occupied Palestinian territories." He labeled the actions a "war crime."

Under the policy to which Khattib refers, Israel strips Palestinians of their Jerusalem residency if they spend more than seven years abroad or if they acquire citizenship from another country. According to numbers obtained by Hamoked, in 2008 alone, Israel revoked more than 4,500 residency permits, a sharp rise from the total of 8,500 residency cards revoked between the years of 1967-2007.