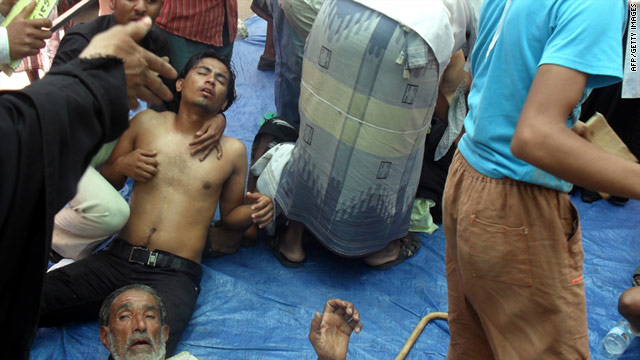 Wounded anti-government protesters receive first aid at a makeshift clinic in Taiz on May 9, 2011.
STORY HIGHLIGHTS

(CNN) -- Live ammunition fired by Yemeni security forces left 11 protesters dead in Sanaa and Taiz on Wednesday, witnesses said, as a human rights group called for an end to the use of deadly force by government troops.

Doctors and eyewitnesses in the cities told CNN that another 169 people had been injured, some critically.

"Shots are heard everywhere in Sanaa," a witness told CNN.

Journalists and medical sources said eight people were killed in the capital when Republican guards began shooting directly at demonstrators in the eastern and northern parts of Change Square. At least 65 people were injured, the sources said, 12 critically. They added that more than 100 additional people suffered injuries from rocks or batons.

"Security forces are aiming for a massacre in Sanaa," said Abdul Wahab Anesi, a medical staff spokesman at a field hospital set up in Change Square.

Before Republican Guards began firing at protesters in the square, they reportedly clashed with military personnel who had been protecting demonstrators gathered there. Journalists, medical sources and other witnesses told CNN that these soldiers defected two months ago along with Maj. Gen. Ali Mohsen Al-Ahmar, who withdrew his support from President Ali Abdullah Saleh in late March. At the time, he promised to protect civilians demonstrating against the president.

In addition to the casualties in the capital, three people were killed and four were reported critically injured in Taiz.

"The attack took place while we were chanting, 'One more week left for you, Saleh,'" said Sabir Ali, a protester in Taiz. The protesters were giving Saleh a week to step down, saying if he does not, they will make good on a vow to march to the presidential palace.

Earlier, a senior security official denied that forces fired on protesters in Taiz.

"Security forces were preventing attacks on civilians led by gangs of the opposition," the official said. "Security forces did not shoot at protesters. Gangs of the JMP were the shooters." The JMP stands for the joint meeting parties, a coalition of opposition parties.

"Security forces kill people, then deny the incident," said Ahmad Bahri, head of the political office at the opposition Haq party. "This is why the Yemeni revolution is taking place."

He said the protesters were unarmed and were marching peacefully when they were shot. Those who died were shot in the head, Bahri said.

Civil disobedience was also seen in the cities of Abyan, Aden, Ibb, Hodeida and Amran, according to reports.

Amnesty International, in a release Wednesday, again called on Yemen's government to stop the use of deadly force against anti-government protesters.

"Security forces in Yemen must be immediately stopped from using live ammunition on unarmed protesters," said Philip Luther, Amnesty International's deputy director for the Middle East and North Africa. "The Yemeni government must allow its people to express their genuine grievances without fear of violence and killing. It must also ensure that justice is done for all those killed unlawfully while exercising their right to peaceful protest."

The high representative of the European Union for foreign affairs and security policy, Catherine Ashton, echoed that call in a statement released Wednesday.

"I am following with the utmost concern the developments in Yemen," Ashton said. "I condemn in the strongest terms the ongoing violence and repression against protesters in Sanaa, Taiz and other cities. I call on the government and security forces to end the use of violence immediately."

Ashton urged Yemeni groups to sign a political transition agreement worked out by the Gulf Cooperation Council, and to implement it without delay.

The agreement stipulates that Saleh transfer power and leave office within 30 days of signing the deal. It also provides immunity for him and those who served in his regime and calls for a unity government to be formed within seven days.

Protesters calling themselves Revolution Youth had called for a civil disobedience day on Wednesday. More than 95% of the shops in Taiz were closed, according to witnesses.

On Monday, medical officials said at least six people were killed and hundreds were wounded when teachers, accompanied by opponents of Saleh's government, demonstrated against salary cuts. Witnesses said security forces fired on the protesters after dispersing marchers with batons and tear gas.

Saleh's impoverished and unstable nation has been wracked by anti-government protests and clashes between demonstrators and security forces for many weeks.