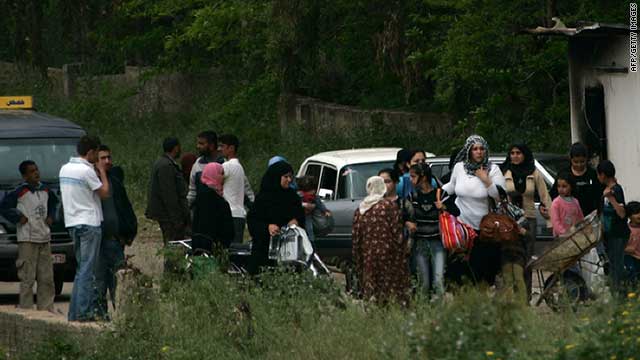 Syrians flee on foot on April 28, 2011 into northern Lebanon after they said unrest broke out in the Syrian town of Tall Kalakh.
STORY HIGHLIGHTS

(CNN) -- A handful of Syrian soldiers trekked across the border into Lebanon over the last two days, the latest report of refugees trickling to safety across the tense national boundary.

Mahmoud Khazaal -- mayor of the Lebanese village of Mokaybleh -- confirmed to CNN Tuesday that three Syrian soldiers have come to Lebanon in the past 48 hours from the Syrian village of Arida, where they were stationed.

They arrived without their weapons, running away from the tensions between soldiers and Arida residents, Khazaal said. They were handed over to the Lebanese army intelligence, which had no comment on the development.

Last week, the United Nations refugee agency also reported that the number of people who left Syria for Lebanon had been around 1,000.

Over the weekend, at least two Syrians died and at least 10 others were wounded amid shelling by Syrian security forces near Lebanon. The people were treated at Lebanese hospitals.

The Syrian government has been clamping down on street demonstrations for more than two months in Daraa and other cities, and deadly clashes have erupted during anti-government protests.

Blair: Syria will end up like Libya
RELATED TOPICS

Demonstrators, emboldened by the tough crackdown and the mass anti-government rallies in other Arab nations this year, are calling for the end of the Bashar al-Assad regime and seeking greater political freedom.

"Let's send a unified message to the regime, angry about the blood of the martyrs, angry about the pain of the wounded, the dignity of the detainees, and cry of the bereaved," the page said.

Meanwhile, the Syrian government is denying claims that a mass grave was found near the embattled city of Daraa, a focal point in the nationwide wave of anti-government rage.

Multiple bodies -- as many as 20 by one account -- were found early Monday in a shallow, unmarked grave near Daraa, an opposition leader told CNN.

But the country's Interior Ministry said the news was untrue and is part of a "campaign of incitement and slandering," Syrian state TV reported Tuesday.

Estimates by various human rights groups about the number of those killed in clashes with government forces have ranged from 700 to 850, Rupert Colville, a spokesman for the U.N. Office of the High Commissioner for Human Rights, said Friday.

The group Human Rights Watch said Monday that security forces are continuing "their nationwide campaign of arbitrary arrests and intimidation against political and human rights activists, holding them incommunicado, forcing them to sign undertakings to stop protesting and in some cases torturing them."

Activists say the government is responsible for the bloodshed, but Syria is blaming the violence on armed groups.

An official source at the Interior Ministry stated Tuesday that an "armed terrorist group" opened fire on an internal security forces vehicle in the Homs province village of al-Bayyada, the Syrian Arab News Agency reported.