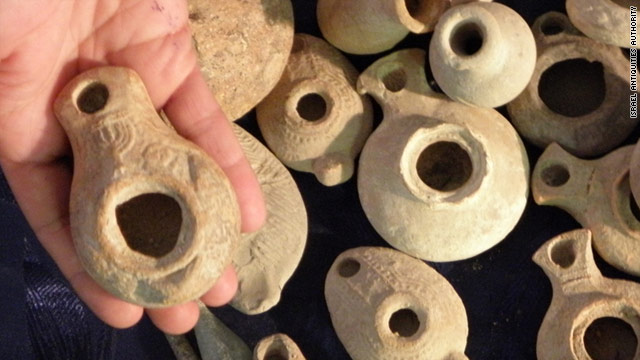 A rare Roman lamp bearing an incised decoration of a menorah, along with other lamps seized from the suspect.
STORY HIGHLIGHTS
RELATED TOPICS

The suspect, a tour guide, is accused of selling ancient coins and 1,500-year-old clay lamps, and pocketing the equivalent of $20,000.

He admitted attempting to smuggle antiquities, selling suspected stolen antiques and trafficking in antiquities without a permit, the authorities said.

He was allowed to fly to the United States after depositing "a large bond," to "ensure he will show up for trial in the future," they said.

The suspect faces up to three years in prison.

Amir Ganor, director of the Israel Antiquities Authority Unit for the Prevention of Antiquities Robbery, also criticized the buyers, saying Wednesday they "are actually encouraging antiquities robbery and the plundering of the country's history."

The suspect, who has not been named, was detained once before after Israel Antiquities Authority inspectors raided a hotel room where he was selling ancient artifacts, they said. They seized hundreds of objects allegedly stolen by antiquities robbers from different sites throughout the country, they said.

But the suspect was released after questioning, the IAA said in a statement Wednesday, without explaining why.

He was under undercover surveillance during the last week, and resumed his illegal activities, selling artifacts to a group of American tourists, Israeli authorities say.

The tourists were detained Monday in a "wide-sweeping, combined operation" in Eilat and at Ben Gurion airport in Tel Aviv.

Eilat customs officials and Antiquities Authority inspectors "were amazed to discover that about 20 members of the group possessed dozens archaeological items purchased in Israel illicitly, which they attempted to take out of the country illegally and without a permit," the IAA said.

They seized ancient bronze and silver coins dating to the Second Temple period approximately 2,000 years ago, as well as clay oil lamps and glass and pottery vessels.

The tourists said they had bought them from their tour guide, paying more than $20,000 in total, Israeli officials said.

The tour guide was detained Monday night at Ben Gurion airport while trying to leave Israel, they said.

He had ancient coins, but no permit to export them, plus "evidence indicating dozens of illegal sales of antiquities during the past two weeks," they said.