Saudi woman claims she was detained for driving 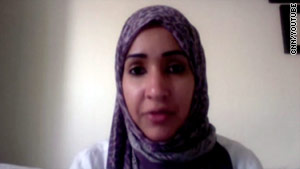 (CNN) -- A 32-year-old Saudi Arabian who has crusaded for women to drive in her country said she was stopped Saturday for driving a car -- even though there is no law against it.

Manal al Sharif, a mother of a 5-year-old boy, told CNN authorities released her and then tried to detain her again early Sunday.

Al Sharif, one of those behind Women2Drive, claimed traffic and religious police detained her for six hours Saturday after they spotted her driving in Khobar. She said she was forced to sign a form promising not to drive again, and then was allowed to go home.

She told CNN that lawyers are trying to stop police from detaining her for a second time. A Women2Drive tweet later indicated al Sharif and her brother had been taken from their Khobar residence to a police station.

CNN was trying to reach Saudi authorities for comment.

Women2Drive is an initiative endorsing the right of women to drive and travel freely in Saudi Arabia.

While there are no traffic laws that make it illegal for women to drive in Saudi Arabia, religious edicts are often interpreted as a ban on female drivers.

Hundreds of women have joined the campaign on Facebook and Twitter to begin driving June 17. Some women, such as Al Sharif, with international licenses began driving earlier.

Al Sharif recently told CNN, "We are not doing anything that is breaking the law."

Strict segregation by sex means women in Saudi Arabia can't travel without a male relative. They can't take public transport. To get around, women hire expensive drivers or taxis.

Al Sharif became frustrated after she had difficulty going home one evening.

"I had to walk on the street for half an hour looking for a cab. I was harassed by every single car because it was late at night and I was walking alone," she told CNN. "I kept calling my brother to pick me up but his phone wasn't answering. I was crying in the street. A 32-year-old grown woman, a mother, crying like a kid because I couldn't find anyone to bring me home."

Al Sharif, who has taught other women how to drive, is resolute about Saudi women being more outspoken.

"We have a saying," she told CNN. "The rain starts with a single drop. This is a symbolic thing."