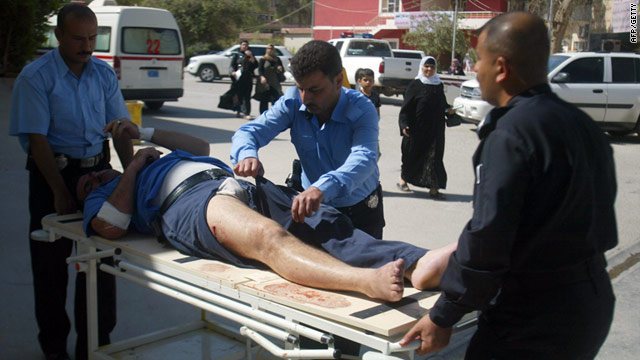 An Iraqi officer is wheeled into a hospital after being injured in a car bomb near the oil-rich city of Kirkuk on Monday, May 23.
STORY HIGHLIGHTS
RELATED TOPICS

Control of the oil-rich city of Kirkuk, which lies 240 kilometers (149 miles) north of Baghdad, is disputed by Arabs, Kurds and Turkmen. The ethnic tensions have often spilled into the streets, with insurgents targeting Arab and Kurdish security forces.

The blast Monday targeted a convoy carrying the captain of a local police station, the official said. The captain, Ahmed Abdul-Ghafour, was wounded in the blast, said the official, who spoke on condition of anonymity because he was not authorized to release the information.

The attack came a day after a series of explosions rocked Baghdad, killing at least 19 people and wounding dozens more.

The bombings come as Prime Minister Nuri al-Maliki prepares to meet with Iraqi political leaders later this month to discuss whether to request U.S. troops remain in Iraq beyond the January 1, 2012, withdrawal deadline.