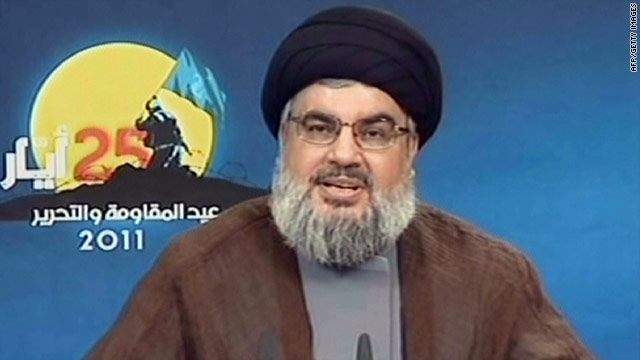 Hezbollah, led by Hassan Nasrallah, is backed by Syria and Iran, and is seen as anti-United States and anti-Israel.
STORY HIGHLIGHTS

(CNN) -- The powerful leader of the Lebanese Shiite militant group Hezbollah weighed in on the conflict in Syria on Wednesday and defended the country's embattled president.

"A majority of the Syrian people believe in the regime and support Bashar al-Assad," said Hassan Nasrallah, speaking on television in Lebanon.

It was the first time Nasrallah has talked about the demonstrations inside Syria publicly.

Hundreds of people have died after anti-government protests that began out in mid-March, and in recent weeks, Syrians have fled to Lebanon to escape the clashes between protesters and security personnel.

Nasrallah said that the ferment across the Middle East and Syria was a "doorway for Israel and the United states" to interfere in Middle Eastern affairs.

"The fall of the Syrian regime is in the interest of America and Israel," he said.

As a resistance movement, he said, Hezbollah has the responsibility "to be protective of the security, stability and peace of Syria's regime, people and army."

But at the same time, he asked his fellow Lebanese not to interfere in Syrian affairs.

Hezbollah, which is backed by Syria and Iran, is anti-United States and anti-Israel, and the United States has classified the movement as a terrorist organization.

Hezbollah is suspected of many attacks over the years, and it fought a war with Israel five years ago. It is a political movement in Lebanon and has a presence in the country's parliament and government.